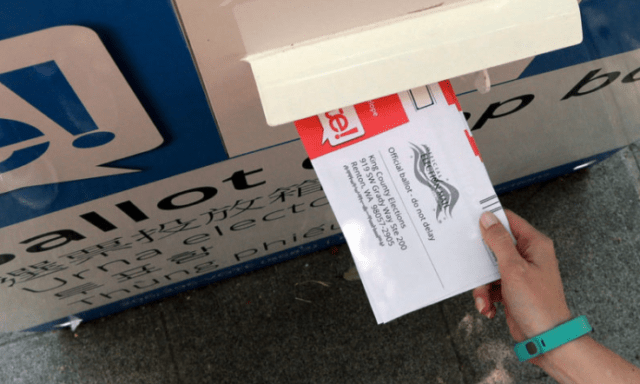 I’m sitting at home with no inside information about voter fraud or election “irregularities.” Yet everyday it’s a new story that appears to be evidentiary in nature. Nevertheless, the talking heads continue to say, “There’s no evidence.”

Even though we are told there is “no evidence,” somewhere between 70-80 percent of Republicans believe the election was rigged, according to the New York Times.

Well, this is my recollection of evidence that we “don’t have.”

Rudy Giuliani says he has “hundreds” of sworn affidavits from real people claiming they’ve witnessed some form of voter fraud and/or unexplainable “irregularities.” What are their allegations? Moreover, peel the layers back from each allegation and you will likely find a mess.

Furthermore, Giuliani said that approximately 100,000 absentee ballots in Wisconsin should have been deemed invalid because there were no applications for them, something required by state law. If this is true it a major problem.

A U.S. Navy veteran and data scientist from Pennsylvania alleged that 47 USB cards used during the state’s Nov. 3 election have gone missing. As a result, he believes that as many as 120,000 votes cast in the election should be called into question.

At a hearing in Gettysburg last week, poll watcher Gregory Stenstrom of Delaware County identified himself as a former commanding officer in the Navy and a forensic computer scientist with expertise on security and fraud issues.

“I personally observed USB cards being uploaded to voting machines by the voting machine warehouse supervisor on multiple occasions,” Stenstrom testified. “This person is not being observed, he’s not a part of the process that I can see, and he is walking in with baggies of USBs.”

Stenstrom alleged the cards may have been used to add illegal votes to the state’s vote count. Furthermore, he said there was a lack of proper oversight on how state election workers handled ballots.

Kristina Karamo, an election observer from Michigan, described a troubling incident that happened at the adjudication table on Election Night.

“What happened was, at the adjudication table, a ballot came up and it was straight party, the person had voted straight-party Democrat and straight-party Republican, and the important part is they were filled-in circles, so that’s an intentional mark …” she said.

“The person didn’t make any other votes for judges, proposals, nothing else, and the poll worker just was like, ‘I’m going to give it to the Democrats’. And so I’m like ‘No, that ballot should be tossed out,’ and this person had previously given a vote to Joe Biden where a voter had voted for Joe Biden and the Green Party candidate for president … so that alerted — had my attention,” she said.

Karamo said she flagged the employee’s supervisor, who was little help. After a brief back-and-forth, Karamo asked the official overseeing the shift, “why not give it to Republicans over the Democrats?” At that point, “he begins to scream at me and tells her to push it through. Me and him have this big argument…,” she said.

“People try to say this is just one incident. No, it’s a bunch of instances. We had no way of coordinating these mass stories that all add up, but the Democrats have plenty of time to coordinate their stories, so it doesn’t make sense that all of our stories are telling the same type of situation where we witnessed massive fraud,” she argued.

Ethan Pease who is a USPS subcontractor from Wisconsin claimed at a press conference that he was informed of plans to backdate 100,000 mail-in ballots in order to circumvent the deadline for submission. Pease made the accusation in a sworn affidavit, despite Attorney General William Barr saying earlier Tuesday the Justice Department has yet to find proof of widespread voter fraud.

“I had no ballots to take on Election Day,” Pease told host Sean Hannity. “The day after the election, I didn’t really think anything of it until the Postal Service supervisor asked me if I had forgotten ballots the night before, and I didn’t have any, so I was like ‘That’s kind of a weird question, no?’

Pease said he was told that “100,000 ballots were supposedly missing in the state of Wisconsin and an order came down to look for them from the Wisconsin-Illinois USPS chapter.”

The Trump campaign is filing a lawsuit to the Wisconsin Supreme Court Tuesday — alleging abuse around the process of absentee voting in the state, which they say affected approximately 220,000 ballots

The election software that “glitched” in both Georgia and Michigan — which in Michigan’s case, incorrectly gave Joe Biden 6,000 votes — is being used in 28 states, according to the software company’s website.

The software company, Dominion Voting Systems, “glitched” in Michigan, causing thousands of ballots that were meant for Republican candidates to be wrongly counted for Democrats in the state’s Antrim County. Antrim is also one of 47 counties in Michigan that uses the same software that experienced this “glitch.”

“Dominion Voting Systems lawyered up and backed out of their commitment to the people of Pennsylvania,” State Rep. Seth Grove said after representatives of the business backed out of a meeting scheduled to answer questions about voting irregularities.

Sidney Powell’s lawsuit in Georgia reveals Iran and China appear to have tampered with U.S. elections in order to help Joe Biden.

The suit found Iran and China were monitoring and manipulating U.S. elections to get their desired outcome this year. The attorney cited the data provided by the 305th U.S. Military Intelligence Battalion.

I don’t know, but we’ve had “glitches” and other allegations that seem to be growing. Moreover, since when does a vendor refuse to answer questions for the government (Pennsylvania) paying them millions of dollars for their services?

An investigation into SEC filings has revealed that the firm which owns Dominion Voting Systems received $400 million dollars from a Swiss bank with close links to the Chinese government less than a month before the election, according to Summit News.

Dominion Voting Systems operates voting machines in 28 states and has been accused by President Trump and his supporters of being involved in deleting millions of votes for Trump in addition to switching votes to Biden on election night.

“On Oct 8, 2020, Staple Street Capital filed SEC Form D offerings and sales amount of $400,000,000 with the Sales Compensation Recipient identified as UBS Securities,” states the investigation, which also notes that another payment of $200,000,000 was received in December 2014.

The overall owners of UBS Securities Co LTD are;

Aside from UBS, the other four owners of UBS Securities are all Communist Chinese front groups.

Although I have not seen this information reported elsewhere, noted attorney Lee Wood seemed to concur.

The revelation that Dominion Voting Systems has financial ties to the Chinese government via UBS Securities will bolster claims by Trump supporters that foreign actors working on behalf of Communist China may have sought to meddle in the presidential election to help Joe Biden, Summit reported.

Other connections between Dominion Voting Systems and the Chinese government have also emerged in recent weeks, including the company’s Core Infrastructure Manager of Information Technology, Andy Huang, who previously worked for China Telecom, which is “wholly run by the Chinese government,” reported the National Pulse.

Charts and graphs show huge voting dumps in the middle of election night that appear to be highly irregular. This is described as an unexplainable anomaly by objective experts. Reasons given for the anomalies do not pass the smell test.

Georgia Secretary of State Brad Raffensperger announced that the state of Georgia has opened 250 investigations into “credible claims of illegal voting and violation of state election law.”

“As we move forward in the process, we will, as we always have been, we will continue to investigate credible claims of illegal voting and violation of state election law,” Raffensperger said. “There are currently over 250 open cases from 2020 and we have 23 investigators to follow up on that. Some of these include, a charge Gwinnett County that absentee ballots outnumber absentee envelopes. This is the kind of specific charge that our office can investigate and ascertain the truth.”

A Philadelphia attorney who was representing President Trump’s campaign has been reportedly placed under official protection after threats were made against her.

Noting court papers filed, The New York Post reported, “Philadelphia lawyer Linda Kerns ‘has been the subject of threats of harm, to the point at which the involvement of police and U.S. Marshals has been necessary to provide for her safety,’ the filing says.” The Post added, “The stunning revelation came two days after Kerns, a solo practitioner, sought sanctions against a lawyer from the firm representing Pennsylvania Secretary of State Kathy Boockvar for leaving her an ‘abusive voicemail on Saturday night.’”

Twitter banned the account of Bobby Piton, a mathematician and expert witness who testified at the Arizona voter fraud hearing this week, Breitbart reported.

According to reports on Twitter, Piton’s account was suspended during his testimony, while the hearing was still ongoing.

At the hearing, Piton said if he was in charge of certifying Arizona’s election results, he would “rather resign” than do so:

If I was an executive at a publicly traded company, I would never sign that, because I risk jail time and having all my money taken from me in lawsuits. So, to answer your question, I would never, ever, have certified. I’d rather resign than certify those results.

I believe they’re fraudulent based on the data, and my sister asked me a simple question this morning, she goes ‘how sure are you?’… And I said, I’d be willing to put my life on it. I’m that sure about my analysis, assuming that the data that I got, from the state and everything else was accurate.

There is a lot more, these are simply the highlights. However, I’ve typed nearly 2,000 words for this article, which means, there are very few readers still with me.

I believe our representative republic is in peril. Elections need to be free from corruption, cheating, and systems that heavily stack the deck toward one side or the other. Therefore, regardless of the outcome of Trump’s presidency, these issues need to be resolved, whether it’s next month or next year. Without resolution we are in deep trouble.

UPDATE: Have Republicans found a “smoking gun” related to voter fraud in Georgia? That is what people are wondering after video was presented Thursday that appeared to show poll workers retrieving suitcases full of ballots from beneath a table in the middle of the night after poll monitors and the press were told they were done counting for the day. Read more.

Jim McNeff is the managing editor of Law Officer and founder of Badge 145, a ministry geared toward helping police officers and their families. Jim worked in military and civilian law enforcement for thirty-one years. While in the USAF he flew as a crewmember aboard the National Emergency Airborne Command Post—a presidential support detail. Following his military service, he served for twenty-eight years with the Fountain Valley Police Department in Orange County, California where he retired as a lieutenant. He holds a Bachelor of Science degree in criminal justice from Southwest University and graduated from the prestigious Sherman Block Supervisory Leadership Institute as well as the IACP course, Leadership in Police Organizations. In addition to being a Medal of Valor recipient, Jim has authored three books: The Spirit behind Badge 145, Justice Revealed, and Jurisdiction.
Share—and speak up for law & order...
Tags: affidavitsDominion Voting Systemselection fraudelection observerexpert witnessMichigan election observerSidney PowellUSPSvoter fraud