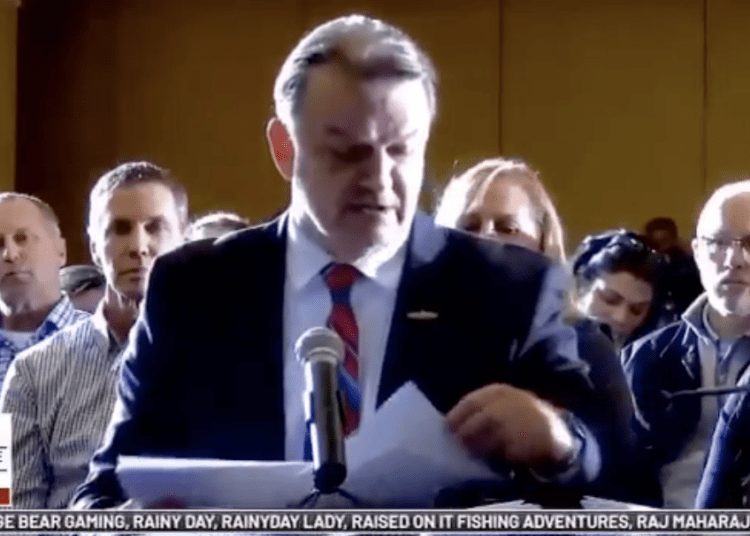 GETTYSBURG, Pa. — A U.S. Navy veteran and data scientist from Pennsylvania alleged this week that 47 USB cards used during the state’s Nov. 3 election have gone missing. As a result, he believes that as many as 120,000 votes cast in the election should be called into question.

At a hearing in Gettysburg on Wednesday, poll watcher Gregory Stenstrom of Delaware County identified himself as a former commanding officer in the Navy and a forensic computer scientist with expertise on security and fraud issues, Fox News reported.

“I personally observed USB cards being uploaded to voting machines by the voting machine warehouse supervisor on multiple occasions,” Stenstrom testified. “This person is not being observed, he’s not a part of the process that I can see, and he is walking in with baggies of USBs.”

Expert witness to the election fraud, Greg Stenstrom gives testimony of witnessing 24-30 USB cards being used to insert 50,000 votes in Pennsylvania!
This is not normal, they denied they did it, but as of today, 47 USB cards from PA election are missing. pic.twitter.com/8UTBs5Fsnk

USB cards are used to move data from one electronic device to another.

Stenstrom alleged the cards may have been used to add illegal votes to the state’s vote count. Furthermore, he said there was a lack of proper oversight on how state election workers handled ballots.

"In all cases the chain of custody was broken."

"It was broken for the mail in ballots, the drop box ballots, the election day USB card flash drives, in all cases they didn't follow any of the procedures defined by the Board of Delaware County of Elections." pic.twitter.com/v9mP8QRqnL

Serving as a witness before lawmakers, Stenstrom said law enforcement personnel failed to act after he reported the alleged mishandling of ballots.

“I literally begged multiple law enforcement agencies to go get the forensic evidence from the computers. It’s a simple process. It wouldn’t have taken more than an hour to image all 5 machines. That was never done despite my objections and that was three weeks ago.”

The hearing was arranged by Pennsylvania state Republicans to address allegations of possible voter fraud following the election in a state where Democrat Joe Biden reportedly defeated President Trump by just over 80,000 votes, according to Fox News.

Pennsylvania – which certified its election results Tuesday — is one of several battleground states where the Trump 2020 Campaign has raised allegations of possible voter fraud. Pennsylvania was worth 20 electoral votes to the winner.

However, the president’s legal fight in Pennsylvania continues. In a letter filed with the Third Circuit Court of Appeals on Wednesday, Trump 2020 Campaign attorney Marc Scaringi called for oral arguments as the campaign fights against a lower court’s dismissal of their case challenging Pennsylvania’s certification of votes.