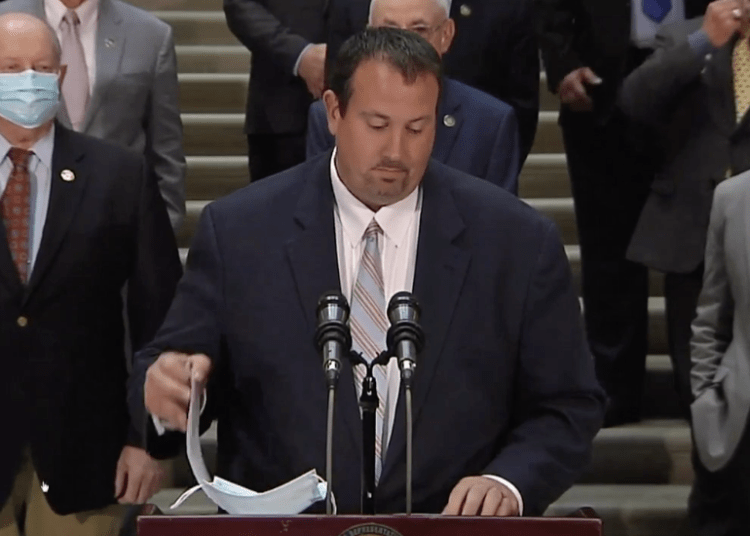 HARRISBURG, Pa. — Pennsylvania Republicans are calling into question Dominion voting machines, used by over 1.3 million Pennsylvanians as part of their risk-limiting audits of the election process in all 67 counties.

A roundtable between lawmakers and Dominion officials was planned, but Dominion Voting Systems ultimately backed out, leading to more questions than answers, CBS 21 reported.

As Pennsylvania State Rep. Seth Grove briefed an audience, he said state lawmakers were looking forward to hearing from Dominion experts who could address the growing fear that the system had been compromised, as discussed by Rudy Giuliani and other members of the Trump legal team during a press conference on Thursday.

The state rep. then continue down a list of rhetorical questions why this would occur if everything was above board.

After weeks of accusations, Dominion Voting Systems have failed to release any analysis of the success of their products in order to rebut the accusations. Moreover, why is it important to retain an attorney to represent a system that worked without error, or corrupt manipulation?

The actions of Dominion Voting Systems last night have given credibility to the accusations, according to Grove.

Dominion Voting Systems are used in 14 Pennsylvania counties, according to Grove. This represents 1.3 million people, or 19 percent of Pennsylvania’s total vote.

State Rep. Dawn Keefer outlined a number of accusations made against Dominion Voting Systems that remain unanswered since reps for the government contractor failed to appear before the lawmakers.

Rush Limbaugh said during his Friday broadcast that not only has Dominion “lawyered up,” but most of their reps are deleting their LinkedIn accounts, leading to further suspicion.

Dominion has released a statement in response to failing to appear before the committee.

They said in part:

“As we await the opportunity to debunk the baseless conspiracy theories being offered about Dominion and its voting systems in a court of law based on yesterday’s press conference claims that litigation is coming, we had to ask for a postponement of the discussion.”

“Notably, our company doesn’t even support Philadelphia, or some of the other jurisdictions being targeted by attorneys in their remarks.”

Texas has three times rejected use of ballot counting software from Dominion Voting Systems, according to a report from the Secretary of State’s office dated January of this year, The Texan reported.

The report of review for the latest software, “Democracy Suite 5.5-A,” by Deputy Secretary of State Jose Esparza states, “Specifically, the examiner reports raise concerns about whether the Democracy Suite 5.5-A system is suitable for its intended purpose; operates efficiently and accurately; and is safe from fraudulent or unauthorized manipulation.”

Attorney General Ken Paxton, whose office was involved in the decision to reject the software, said on a radio show this week, “We have not approved these voting systems based on repeated software and hardware issues. It was determined they were not accurate and that they failed — they had a vulnerability to fraud and unauthorized manipulation.”