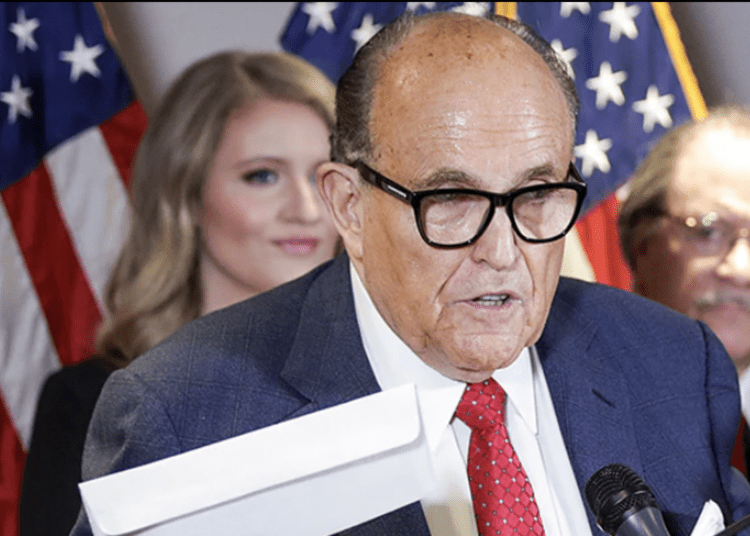 WASHINGTON — President Trump’s personal attorney Rudy Giuliani on Thursday aggressively made the case for the Trump campaign’s legal challenge of the 2020 election results, alleging in a fiery news conference that there was a “centralized” plan to carry out voter fraud around the country.

This is a different approach than the campaign has recently taken in court, where they have primarily focused on the validity of ballots and counts without asserting fraud.

Giuliani presented evidence of a massive fraud scheme. In providing details, he asserted that this is the “logical conclusion” reached as a result of incidents he said took place in several states.

“What I’m describing to you is a massive fraud,” Giuliani said at the Capitol Hill news conference with other members of Trump’s legal team, who repeatedly lashed out at the news media and accused them of treating their efforts unfairly, Fox News reported.

At one point, Giuliani repeatedly told one member of the press, “you’re lying,” as he accused them of failing to report details that have already been known.

His descriptions largely entailed hundreds of sworn affidavits by witnesses articulating a variety of corrupt practices, which could have led to hundreds of thousands of altered and fraudulent votes.

The former U.S. Attorney and New York City mayor spoke to incidents in Pennsylvania where Republican poll watchers said they were not allowed to observe the counting process because they were kept too far away. This was vital since truckloads of ballots arrived late into the evening and early morning hours. A judge had ruled in their favor and ordered that they be permitted six feet away from the counting at a center in Philadelphia, but that was overturned after officials appealed.

Giuliani also claimed that while Pennsylvania does not allow absentee voters to fix any errors with their ballots, some were given that opportunity — but not those from Republican areas.

He cited sworn affidavits from cases in Pennsylvania and Michigan from poll workers who spoke about instructions from supervisors. One affidavit said that workers in Pennsylvania were instructed to assign ballots without names to random people, resulting in thousands of people in Pittsburgh showing up to the polls to find that votes had been cast in their names.

Another affidavit said that in Michigan a supervisor instructed workers to change the dates on absentee ballots to show that they arrived earlier than they had. An affidavit also claimed that workers were told not to request photo identification from Michigan voters, even though state law requires it.

Moreover, Giuliani said that approximately 100,000 absentee ballots in Wisconsin should have been deemed invalid because there were no applications for them, something required by state law.

The details provided by the legal team seemed to be a series of bombshells, that when produced in court would amount to a great deal of evidence. Nevertheless, the press remains insistent that new evidence is not being provided.

Trump campaign legal adviser Jenna Ellis explained the “lack of new evidence” at the news conference to support their allegations by saying this was merely an “opening statement,” and that more evidence would be forthcoming in court.

Giuliani pushed back against a reporter who claimed he and his team were taking their time rolling out their cases.

“We’re not going to drag it out. I mean it’s ridiculous for you to say we’re dragging it out,” Giuliani said, noting that Al Gore took more time in the legal battle over the 2000 election. Furthermore, the present circumstances are far more convoluted than “hanging chads.”

He also said that more lawsuits could be coming in Arizona and potentially New Mexico, where Trump trails Biden by nearly 100,000 votes. He also said a challenge could come in Virginia, where Biden leads by almost 500,000 votes, if they believe they could overcome that deficit.

The former NYC mayor believes that Trump won several of the swing states that have gone to Biden, and he intends to prove it with an abundance of evidence in court.

Giuliani also said the details being offered were similar to an “opening statement” and not meant to try the case during the press conference. Although he is acting as a private citizen, he said he would have many corrupt people in custody if he handled the circumstances as a prosecutor. When asked by a reporter, “Where is the FBI”? he comically began to look beneath the podium and around the room before answering, “Where’ve they been for the past 3-4 years?”

The legal team offered details about “over-voting.” This is simply explained as more votes received than actual citizens (including children) in a specific area. They claim over-voting is present in several locations with numbers reaching 100-300 percent of the city’s respective population. Historically, anything over 80 percent would be considered over-voting. He claimed the spike in over-voting can be seen on charts and graphs. He said these are statistical improbabilities if not absolute impossibilities.

The legal team also offered details that point to intentional corruption in the Dominion voting machines based upon coding and recalculating capacities. He asserted the same voting machines are controlled outside the U.S. by people hostile to America, and certainly President Trump.

Giuliani challenged reporters to query the hundreds of sworn affidavits, which are a matter of public record, while he confidently declared the case will demonstrate an orchestrated, corrupt system intentionally meant to override the will of U.S. citizens.

Giuliani was sweating profusely during the news conference. At one point, he had dark beads of sweat running down both sides of his face. It almost looked like he was bleeding. The dark substance has now been reported as hair dye. As a result, the former mayor has become the butt of leftwing jokesters who’ve disregarded the alarming information he supplied during the briefing.