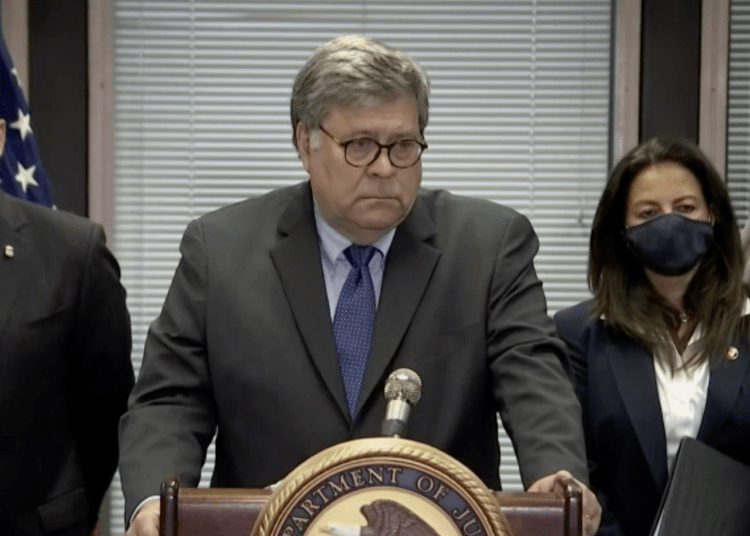 A group of 25 House Republicans sent a letter to Attorney General William Barr on Friday demanding the AG investigate alleged fraud in Georgia and work to ensure fair runoff elections slated for January in the Peach State, Washington Examiner reported.

“As Georgia’s Secretary of State Brad Raffensperger revealed Monday, his office is investigating multiple organizations attempting to register illegal and invalid voters in Georgia,” says the letter, signed by 21 current members and four members-elect. “As the Georgia Secretary of State’s office lacks prosecutorial power, we ask that the Department of Justice simultaneously investigate and prosecute this illegal behavior under federal law.”

“Additionally, we ask that you use your authority as Attorney General to issue a preliminary order preventing any organization from registering illegal and invalid voters in the upcoming January 5th Georgia U.S. Senate Runoff Elections,” they continue.

“We strongly urge you to use your authority as Attorney General to issue a restraining order or temporary injunction preventing organizations from registering illegal and invalid voters in the upcoming election,” the letter reads. “Swift action is needed to ensure that illegal votes do not dilute the rights of legal voters.”

Earlier in the week, Barr told the media that “to date, we have not seen fraud on a scale that could have effected a different outcome in the election.”

The effort is spearheaded by Alabama Rep. Mo Brooks (R). It comes on the heels of troubling video presented during the Georgia Senate’s Government Oversight Committee hearing on Thursday that promoted Republican Governor Brian Kemp to call for a signature audit of Georgia’s election results, Daily Wire reported.

People have been increasingly frustrated with a non-specific explanation insisting there was no impropriety.

However, in a statement obtained by The Washington Examiner, Brooks said, “No one should ever be allowed to bring an estimated 15,000 to 18,000 ballots to a vote-counting facility in suitcases; hide those suitcases under a table before the vote-counting facility opens; at roughly 10:30 PM at night, declare that vote tabulation is finished for the night and will resume at 8:30 AM the next day; order all poll watchers and media to leave the facility; and then, once the facility is reduced to a bare minimum of five co-workers (and possibly criminal co-conspirators), with no poll watchers present; roll out the suitcases from their hiding place, withdraw thousands of ballots, and stuff the vote-counting machines with what appears to be, by the conduct observed, illegal and fraudulent ballots. Yet that is exactly what a newly released video of a polling location reveals.”

However, conservative voters have no confidence in their statement.

“If you look at the video tape, the work you see is the work you would expect, which is you take the sealed suitcase looking things in, you place the ballots on the scanner in manageable batches and you scan them,” said Sterling, a Republican.

As reported by The Daily Wire on Friday, attorney Jacki Pick presented the video at the hearing on Thursday:

“You’re looking at one big room here; this is where, according to our witnesses, who’ve given sworn affidavits, this is where the absentee ballots and military ballots are being tabulated on Election Day,” she said, showcasing the security video.

“So, we have the tape from first thing in the morning, all the way past the close of the polls. What you have, is essentially, two Republican field organizers who were sent here to be observers; at no time were they actually permitted to observe in a meaningful way … they are roped off on the side.”

The observers are “going to get there at about 8 o’clock (in the morning) to watch the tabulation of absentee and military ballots,” Pick continued. “But according to their affidavits, at about 10 o’clock, there was one person working the polls who told everyone in the room to leave, on the basis they were going to stop counting and return at 8:30 in the morning.”

“According to the witnesses, the Republican observers, there is a lady who has blonde braids who comes out to announce we’re going to stop counting, everyone go home,” she said. “And, in fact, we see that’s what happens is everyone clears out, including the Republican observers and the press, but four people stay behind and continue counting and tabulating well into the night … And they will continue counting unobserved, unsupervised not in public view as your statute requires, until about 1 in the morning.”

“The reason we know this is because when our Republican observers were forced to leave, they went to the central tabulation center and they got news from a word from a news crew that, in fact, counting had continued,” Pick detailed. “They got word that not everybody left according to plan, and some people stayed behind. So this shocked them, so they returned back to State Farm Arena at about one o’clock in the morning, where they confirmed that, in fact, people had just left State Farm Arena in contravention of what they’ve been told by the supervisors who are running this operation.”

Pick then shows the video footage from about 10:25 p.m. on Election Day. “You’re going to watch this place be busy and filled up to emptied at some time between 10:25 and 10:35, which is consistent with what the affidavits say.”

At 10:37, Pick shows, “the place is a ghost town. This is where the people were vacated and told go home come back at 8:30. We will now stop working and stop counting. But notice who stays behind: you have four people, consistent with our affidavits, who stayed behind.” One of the women who stays behind, she says, was one of the people who told everyone the counting had stopped.

Pick then details what looks like “suitcases” of ballots being pulled from “underneath a table.” The people left behind wait until everyone else leaves, and then “move into action,” “scanning ballots.”

The attorney said her team asked themselves, “Okay, is it normal, to store suitcases of ballots under a table under a tablecloth? Is that how they run the place? Maybe this is what they’ve been doing all day? … So we went back and watched the video, as a team of us: we don’t see that.”

“This table, the black one, was placed there by the lady with the blonde braids at about 8:22 a.m. in the morning. So she put that table there. The same person who’s staying behind now, the same person who cleared the place out under the pretense that we’re going to stop counting is the person who put the table there at 8:22 in the morning,” Pick said, noting that her teams needs 14-hours to comb through the footage. “Yeah, I saw four suitcases come out from underneath the table.”

A list of the members and members-elect who’ve signed the letter can be viewed, below:

The letter sent to Barr can be viewed, below:

Two pillars of a successful republic are election integrity and confidence in our democratic processes. As Georgia’s Secretary of State Brad Raffensperger revealed Monday, his office is investigating multiple organizations attempting to register illegal and invalid voters in Georgia. [1] As the Georgia Secretary of State’s office lacks prosecutorial power, we ask that the Department of Justice simultaneously investigate and prosecute this illegal behavior under federal law. Additionally, we ask that you use your authority as Attorney General to issue a preliminary order preventing any organization from registering illegal and invalid voters in the upcoming January 5th Georgia U.S. Senate Runoff Elections.

By way of background, these organizations stand accused of registering a deceased Alabama voter, encouraging illegal voting by out of state residents, as well as knowingly sending Georgia voter registration applications out of state – as far as New York.[2] Allegedly, Operation New Voter Registration Georgia encouraged college students to temporarily change their residency so that they could vote in the runoff election,[3] which is illegal under multiple federal statutes. See 252 U.S.C. § 10307(c) & 18 U.S.C. § 371. Reportedly, Vote Forward attempted to register a dead voter,[4] which is also illegal under federal statute. See 52 U.S.C. §§ 10307(c), 10307(e), 20511(2). America Votes and the New Georgia Project, founded by Stacey Abrams, both are accused of sending voter registration application to invalid addresses.[5]

Federal law gives the Attorney General the authority to issue preliminary relief when there are reasonable grounds to believe that any person is about to engage in any election offense. See 52 USC § 10308(d). [6] We strongly urge you to use your authority as Attorney General to issue a restraining order or temporary injunction preventing organizations from registering illegal and invalid voters in the upcoming election. Swift action is needed to ensure that illegal votes do not dilute the rights of legal voters.

Thank you for your prompt attention to this matter.