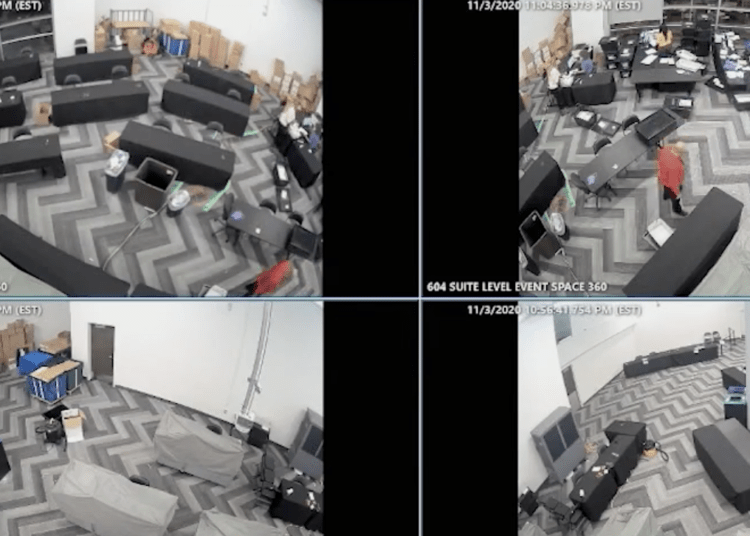 Poll workers told monitors and the press they were finished counting ballots on election night. When the room was cleared they pulled suitcases of alleged ballots from beneath tables and continued working. (Screenshot Fox News)

GEORGIA — Have Republicans found a “smoking gun” related to voter fraud in Georgia? That is what people are wondering after video was presented that appeared to show poll workers retrieving suitcases full of ballots from beneath a table in the middle of the night after poll monitors and the press were told they were done counting for the day.

Gov. Brian Kemp, the Georgia Republican who has been fiercely criticized by President Trump over his approach to allegations of voter fraud in his state, said Thursday that new testimony has raised additional questions and a signature audit should be performed, Fox News reported.

Kemp, who was interviewed on “The Ingraham Angle,” was referring to surveillance video that allegedly showed poll watchers being led out of a room at State Farm Arena, the state’s largest vote-counting center, after being told that the vote count was complete for the night. Once they left, a woman could be seen pulling out suitcases from underneath a table that allegedly contained ballots. The votes were allegedly counted for hours, with no election supervisors present, CBS46 reported.

And then pull out SUITCASES of ballots.

WHERE IS THE DEPARTMENT OF JUSTICE?”pic.twitter.com/1Nc8cZqGXA

Kemp told Ingraham that he has called for a signature audit, but the power in the state to make the order lies with the secretary of state’s office.

“I think it should be done. I think especially [given] what we saw today… it raises more questions,” he said.

Jenna Ellis, one of the lawyers on the Trump campaign’s legal team, responded to the Kemp interview on Twitter, “@TrumpTeam requested signature verification FIVE TIMES.”

Sens. Kelly Loeffler and David Perdue, the Republicans in the Georgia runoff, backed the president’s signature-matching demands last month and and have called for the resignation of Georgia Secretary of State Brad Raffensperger.

Trump took to Twitter late Thursday and said the best way for the two Republicans to win in the runoff election in the state on Jan. 5 is to “allow signature checks in the Presidential race,” which would ensure his own in the state.

Kemp told Ingraham, “I think in the next 24 hours, we will see a lot more from the hearings that the legislature had today and we will be able to look and see what the next steps are. That’s where we are now.”

Kemp has been severely criticized by Trump who said he was “ashamed” for endorsing him for governor. Kemp reflected in the interview on the intense criticism figures including the president and high-profile attorney Lin Wood Jr.

“Look, I’m frustrated like [Trump] is, a lot of people are,” said Kemp, who added he still supports the president and his policies. “Like he said, he’s a fighter, we had a few battles but nobody worked harder for Donald Trump before Nov. 3 and I continued to help his efforts in the legal campaign and I will continue to do that.”

As it stands now, Joe Biden has a 12,670 margin of victory in the Peach State. But after yesterday’s revelation, the win seems to be anything but secure.

Raffensperger’s office did not immediately respond to an email from Fox News.