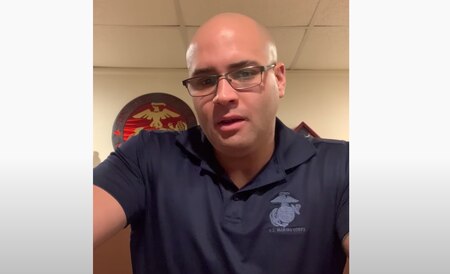 Holyoke, MA – Holyoke Police Officer Rafael Roca released a 43-minute video on YouTube on Sunday, claiming the police department has been “corrupt and racist” … since as far back as anyone can remember. Roca said that he was a career Marine and he retired in 2016 to pursue his dream of becoming a police officer. But that dream has been “hurt by corrupt police officers.”

Roca said that he made the video and uploaded it to YouTube because he wanted to expose the “injustice” taking place within the Holyoke Police Department.

Roca specifically called out Police Chief Manuel Febo, accusing him of nepotism and covering up misdeeds committed by friends on the force.

Roca said that he knew about police officers sleeping in their cars while on duty, stealing money, and assaulting people. He also said that it was concerning that a local police officer could earn $260,000 in one year, but he did not give specific information on that allegation.

Roca said he would probably be fired or suspended for making the video.

A day after posting the video, Roca told the Gazette that a police captain called him to say that Police Chief Manny Febo was ordering him to remove the video. When he declined to do so, Roca said he was suspended with pay for “failure to obey a direct order on my day off and for violating their social media policy.”

Share and speak up for justice, law & order...
Tags: corruptionHolyokeMassachusettsVideo