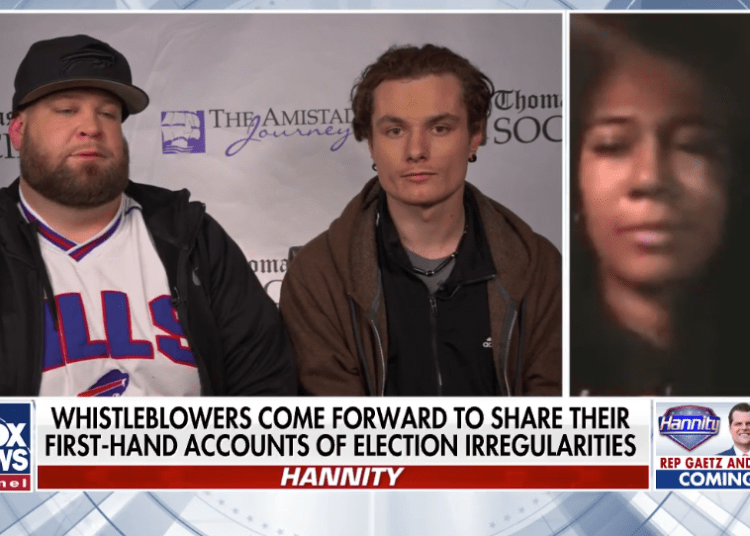 Ethan Pease who is also a USPS subcontractor from Wisconsin claimed at a press conference earlier Tuesday that he was informed of plans to backdate 100,000 mail-in ballots in order to circumvent the deadline for submission. Pease made the accusation in a sworn affidavit, despite Attorney General William Barr saying earlier Tuesday the Justice Department has yet to find proof of widespread voter fraud.

“I had no ballots to take on Election Day,” Pease told host Sean Hannity. “The day after the election, I didn’t really think anything of it until the Postal Service supervisor asked me if I had forgotten ballots the night before, and I didn’t have any, so I was like ‘That’s kind of a weird question, no?’

Pease said he was told that “100,000 ballots were supposedly missing in the state of Wisconsin and an order came down to look for them from the Wisconsin-Illinois USPS chapter.”

Pease said that while he identifies as “an independent or libertarian,” he felt compelled to speak out because he “couldn’t go to the grave knowing what I knew and just keeping that to myself knowing that something went wrong in this election.”

Kristina Karamo, an election observer from Michigan, described a troubling incident that happened at the adjudication table on Election Night.

“What happened was, at the adjudication table, a ballot came up and it was straight party, the person had voted straight-party Democrat and straight-party Republican, and the important part is they were filled-in circles, so that’s an intentional mark …” she said.

“The person didn’t make any other votes for judges, proposals, nothing else, and the poll worker just was like, ‘I’m going to give it to the Democrats’. And so I’m like ‘No, that ballot should be tossed out,’ and this person had previously given a vote to Joe Biden where a voter had voted for Joe Biden and the Green Party candidate for president … so that alerted — had my attention,” she said.

Karamo said she flagged the employee’s supervisor, who was little help. After a brief back-and-forth, Karamo asked the official overseeing the shift, “why not give it to Republicans over the Democrats?” At that point, “he begins to scream at me and tells her to push it through. Me and him have this big argument…,” she said.

“People try to say this is just one incident. No, it’s a bunch of instances. We had no way of coordinating these mass stories that all add up, but the Democrats have plenty of time to coordinate their stories, so it doesn’t make sense that all of our stories are telling the same type of situation where we witnessed massive fraud,” she argued.

Karamo acknowledged that while she is a registered Republican, she told Hannity that “this is beyond Republicans and Democrats. This is about our republic being protected, Fox reported.