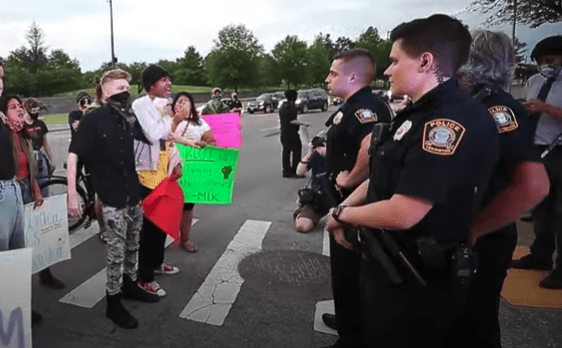 FRANKFORT, Ky. — A bill advancing out of a Kentucky Senate committee on Thursday would make it a crime to insult or taunt a police officer to the point where the taunts provoke a violent response.

Senate Bill 211 passed by a 7-3 vote, according to reports. The proposal was a response to riots throughout the country last summer, said the bill’s sponsor, Sen. Danny Carroll, R-Benton, a retired police officer.

Louisville saw numerous violent protests and rioting last year following the Breonna Taylor incident in March. Police had obtained a narcotics related search warrant for her apartment. After knock and notice was provided, police made entry only to be met with gunfire from Taylor’s boyfriend, Kenneth Walker. Sgt. Jonathan Mattingly was shot in the leg. Officers returned fire, killing Taylor.

This week prosecutors decided to forego charges against Walker, Law Officer reported. Mattingly filed a lawsuit against Walker last October. He alleges that the shot was “outrageous, intolerable and offends all accepted standards of decency or morality.”

Meanwhile, Carroll noted the newly proposed legislation wasn’t about limiting lawful protest “in any way, shape, form or fashion,” according to WDRB.

“This country was built on lawful protest, and it’s something that we must maintain — our citizens’ right to do so. What this deals with are those who cross the line and commit criminal acts,” he said.

The bill kept language making a person guilty of disorderly conduct — a Class B misdemeanor — if they accost, insult, taunt, or challenge “a law enforcement officer with offensive or derisive words, or by gestures or other physical contact, that would have a direct tendency to provoke a violent response from the perspective of a reasonable and prudent person.”

State Sen. David Yates, a Louisville Democrat, criticized the bill’s language, saying police officers he knows are too professional to retaliate violently simply because of words.

“I don’t believe that any of my good officers are going to be provoked to a violent response because somebody does a ‘yo mama’ joke, or whatnot,” Yates said.

Other provisions in SB 211 would push back against the “defund the police” movement and make a person who “knowingly” provides supplies at a riot — that can be used as weapons or “dangerous instruments” — subject to a riot-in-the-second-degree charge, WDRB reported.

The bill will now go to the full Senate and could be passed as early as next week, though not much time will remain in the 30-day session to also make it through the House.