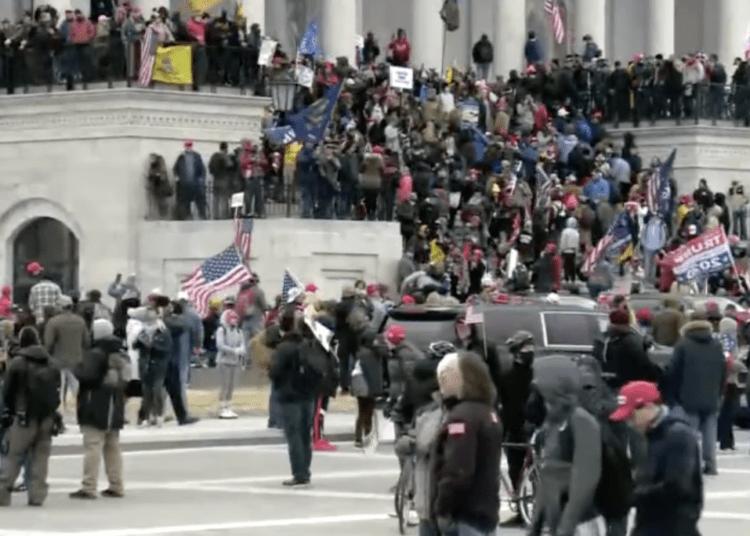 CHICAGO — Retired Chicago firefighter David Quintavalle had a pretty normal Wednesday last week. He went grocery shopping at Aldi in the morning, and spent the evening celebrating his wife’s birthday with home-cooked lobster and steak. His son, a Chicago police officer, celebrated as well. The next day, Quintavalle went to Home Depot.

None of this should be news, because these are things that normal people do regularly. But for Quintavalle, an otherwise normal day was shattered when he was publicly and falsely accused of being the man who attacked a U.S. Capitol Police officer with a fire extinguisher, Daily Wire reported.

Quintavalle is not on social media, so he didn’t know immediately that his life would be upended Tuesday when a random person on Twitter decided an image of him during a protest in Chicago matched the image of the man who allegedly attacked Capitol police.

“I got a phone call from a friend who said, ‘You should see what they twittered about you,’” Quintavalle told Chicago Patch.

“Some woman from British Columbia showed the [surveillance] picture of the guy wearing CFD stocking cap and a beard like I’ve had, and file footage when I was protesting the city inappropriately scoring the fire lieutenants exam, and said, ‘This is the guy.’ And the ball started rolling. Everybody started saying, ‘Here’s the guy,’” he added.

As Patch reported, the unconfirmed identification of Quintavalle spread, and people who pointed out that the Quintavalle’s picture did not match the unidentified man in the photo from the Capitol riot, they were accused of being “bots.”

People dug up whatever information they could about Quintavalle, pointing out his son’s profession and finding a three-year-old blog post from his estranged brother “accusing the retired firefighter of being a ‘bum’ who fraudulently acquired their mother’s home.”

Within hours of the false identification, Quintavalle started receiving phone calls from strangers calling him a “f***ing murderer.” Reporters camped out in front of his house. A patrol call had to be sent to keep an eye on the situation.

Finally, Quintavalle spoke to the FBI on Wednesday. He provided them with receipts and other evidence showing that he was 600 miles away from the Capitol riot, Patch reported.

Attorney John Nisivaco told Patch that he presented the evidence provided by Quintavalle to the U.S. Justice Department and expects “the federal government will soon shed light on this case of mistaken identity.”

“Social media has killed David Quintavalle. This has been an absolute disaster to him personally and his family. There’s a cop car outside his house. It’s over a picture that kind of looks like him because people sitting behind a keyboard with no proof or evidence are throwing out these tweets, and they’re wrong. Holy smokes, it’s eye-opening how terrifying social media can be when something like this happens,” Nisivaco added.

However, a different retired firefighter wearing a CFD stocking cap is reportedly the man caught on camera throwing a fire extinguisher that hit at least three officers at the riots. As a result, he was arrested Thursday, according to officials.

Video footage of the incident shows the man hurling a fire extinguisher at officers attempting to control a mob outside of the west side of the Capitol.

One of the officers who was hit, William Young, was evaluated at a hospital and cleared to return to duty, the charging document said.