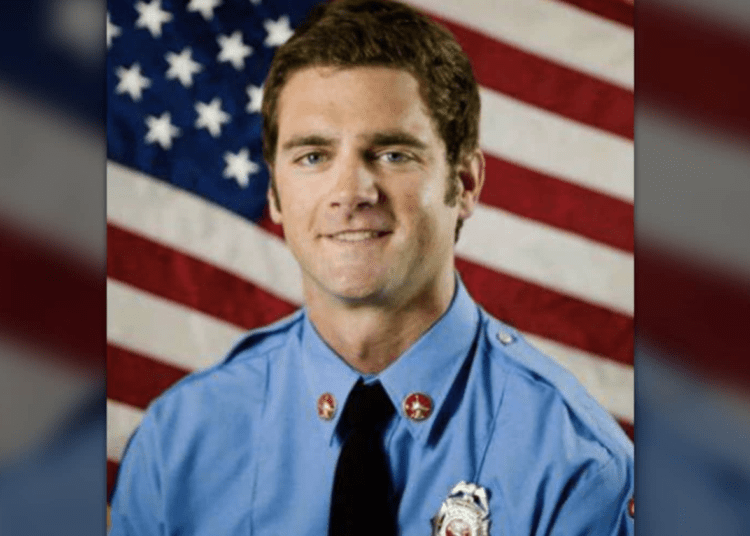 Andrew Williams has worked with the department since 2016. (Sanford Fire Department)

SANFORD, Fla. — A firefighter in central Florida was arrested by FBI agents Tuesday after a photograph surfaced online showing him inside the U.S. Capitol during the Jan. 6 incursion.

As rioters stormed the building, Andrew Williams, a firefighter-paramedic with the Sanford Fire Department, was photographed wearing a pro-Trump baseball hat while pointing to a sign over a doorway that reads “Speaker of the House: Nancy Pelosi,” Fox News reported.

FBI agents arrested Williams Tuesday. He is charged with one count of unlawful entry of a restricted building and one count of disorderly conduct on Capitol grounds.

Florida @CitySanfordFL firefighter on leave WITH PAY after he's caught on camera participating in yesterday's riot inside the Capitol #BecauseFlorida: https://t.co/s95gMVeOh0 pic.twitter.com/y6zOUhe8dW

Walking out of the courthouse in Orlando Tuesday, Vince Citro, the attorney representing Williams, said President Trump and the U.S. Capitol Police “encouraged despicable behavior,” and his client “took part in none of it.”

“In fact, you’ll notice in the complaint there are no allegations that he did any of those things,” Citro told reporters.

This is moment @CitySanfordFL firefighter Andrew Williams left federal court after being arrested for his participation in #CapitolRiot. His attorney says @POTUS encouraged “despicable” behavior and that Williams “took part in none of it.” @MyNews13
?: Nick Allen pic.twitter.com/giYUgsKqeQ

As of Tuesday, Williams was placed on administrative leave without pay pending the results of the current administrative and criminal investigations against him, the Sanford Fire Department said in a press release.

“We hold the men and women in this department to the highest standards. It saddens me that the actions of one individual have tarnished the hard work and dedication that the rest of the department puts forth on a daily basis,” Sanford Fire Chief Craig Radzak said.

“Our investigation will continue in conjunction with the current federal criminal investigation,” his statement continued. “As is policy with any type of policy violation, including a criminal violation, an internal administrative process must be followed in order to ensure a thorough investigation with a just conclusion. I ask for the public’s patience as we move through this process.”

The judge granted Williams’ release from custody Tuesday on a $25,000 signature bond.

The terms of his release agreement require Williams to surrender any firearms and his passport, restrict his travel and submit to mental health evaluations and drug tests, WKMG-TV reported.