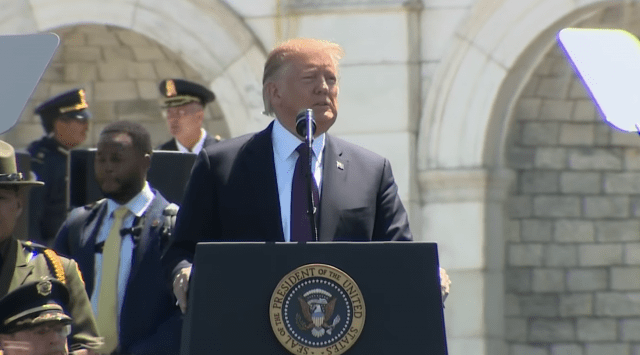 WASHINGTON — U.S. Capitol Police officers have filed a lawsuit against former President Donald Trump, Roger Stone, the Proud Boys, and other Trump supporters for events that took place during the Jan. 6 riot.

The lawsuit filed on behalf of seven Capitol police officers accuse Trump of spreading falsehoods regarding widespread election fraud, as well as encouraging the use of force, threats, and inciting violence against members of Congress.

The plaintiffs make several allegations. They claim there was a violation of the “federal Ku Klux Klan Act, the D.C. Bias-Related Crimes Act, and other laws” as the primary reason for legal action. Yet they also claim that Trump knew about the threats against members of Congress and ignored requests to dissuade or call off rioters, Washington Examiner reported.

The list of plaintiffs include Officers Conrad Smith, Danny McElroy, Byron Evans, Governor Latson, Melissa Marshall, Michael Fortune, and Jason Deroche. The group says they are victims of violence that should be blamed on Trump and other defendants.

“Many Defendants in this case planned, aided, and actively participated in that attack. All Defendants are responsible for it,” read the court filing.

The civil action is the latest of a string of lawsuits surrounding the riots. However, it’s the first to allege that Trump had worked in concert with both political organizers and right-wing groups such as the Proud Boys to promote the “Big Lie,” according to the New York Times.

“We joined the Capitol Police to uphold the law and protect the Capitol community,” the group of officers said in a statement released by their lawyers, NBC DFW reported. “On Jan. 6 we tried to stop people from breaking the law and destroying our democracy. Since then our jobs and those of our colleagues have become infinitely more dangerous. We want to do what we can to make sure the people who did this are held accountable and that no one can do this again.”

The Examiner reported the plaintiffs are seeking compensatory and punitive damages to be determined by a jury at trial.