Yet another false narrative of the Left 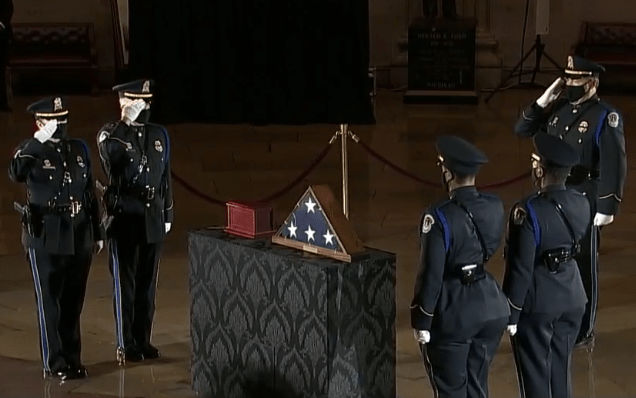 Well, we finally learn why U.S. Capitol Police Officer Brian Sicknick REALLY died on Jan. 6th and surprise, he wasn’t “murdered” as the Progressive Left’s dysfunctional politicians and their media minions have repeatedly told us. The hapless officer’s cause of death (COD) has finally been classified medically as “natural causes” due to “acute brainstem & cerebral infarcts due to basilar artery thrombosis.” So, what does that mean to the average person? He suffered a stroke(s) while engaged with protesters at the Capitol.

As a medical and death investigator, I spend my days with a nationally recognized Forensic Death Investigations Team of medical and forensic experts. Our challenging task is to determine how and why people die. I’ve got hundreds of death cases under my belt and have reviewed and opined on over 1,000 autopsies and toxicology’s. Our motto is “We speak for those who can’t speak for themselves.” I was troubled by Officer Sicknick’s tragic death from the outset. I saw many videos of the confrontation but saw nothing that lead me to believe that he was “killed” by protestors.

Following Officer Sicknick’s tragic death, the Progressive Left immediately forwarded Story #1 – Officer Sicknick was bludgeoned over the head by a man swinging a fire extinguisher. FALSE. There was Zero evidence of traumatic injury to the officer’s body.

The Left then had to quickly come up with an alternate story that Officer Sicknick was “murdered” by Trump-inspired Alt Right insurrectionist protesters. Story #2 – Officer experienced “an acute allergic reaction to exposure to chemical bear spray.” FALSE. The pathology documented zero forensic evidence of any congestion or restriction to the breathing passages or respiratory system. There was also zero evidence of any presence of oleoresin capsicum (OC) oils, wax, or particulates in the Officer Sicknick’s respiratory system.

I have personally experted in numerous cases of alleged “OC spray deaths,” and literally wrote the manual on the topic of police use of chemical agents and their physiological effects. I have presented much testimony on this subject. Fact, there is LESS OC in the average can of police OC or bear spray than you would find in a bowl of Mexican hot salsa. You don’t see a lot of patrons in Mexican restaurants keeling over and dying from “an acute allergic reaction” to Mexican salsa. Fact, in typical police or animal defense OC sprays, only between 5% – 12% of an entire canister is comprised of actual OC ingredients. Usually, over 90% of the canister is filled with distilled water, mixed with ethyl alcohol and about 3% of bixtrix, an inert, edible food preservative. Truth, more people have died in the back seat of Sen. Ted Kennedy’s car than have actually died from the ingestion of OC. Nope. Another false narrative. So let’s return to Officer Sicknick’s COD, “acute stroke.”

Whenever there is a lack of traumatic injury to the body, yet we have an acute catastrophic medical emergency proximate to death, I want to “get inside” the body to see what’s in there that might explain the medical presentations.

The heart (cardiovascular system) can tell you a lot. I first look at the heart weight in grams and compare that to the body’s stature in height and weight. I specifically look for evidence of “cardiomegaly” (an enlarged heart), and then look at the “fixtures” (valves, pipes, congestion, blood flow, constrictions, damage, etc.). Is the heart “normal?” Was it functioning properly at the time of death? Studies of over 20,000 hearts document that the presence of an enlarged heart can present the patient with a chance of acute, sudden cardiac arrest 150X greater than a person with a normal sized heart. That’s a huge health risk. Does the name George Floyd ring a bell?

Next, I want to see the respiratory system. Lungs, breathing apparatus and the kidneys. Is there any forensic evidence of respiratory distress/arrest, or renal failure? That’s important to know in our process of acceptance or elimination as a COD.

Next, I want to know what the decedent’s brain and blood flow to the brain looks like. Is there any evidence of anoxic injury, hemorrhage, stroke? Next, how about some biopsies and tissue samples.

Toxicology’s are always important, even when an on-duty police officer in the decedent. Is there evidence that he was taking prescribed medications for any pre-existing psycho-medical issues? Was he on a medication regimen? What’s on-board and why? That’s always good to know.

All good death investigators and pathologists want a thorough medical and event history proximate to any sudden death. This is part of what we refer to as the “forensic reconciliation process” in any death investigation. Important probative questions surround the decedent’s medical history like any pre-existing on-board problems like hypertension, cardiovascular, respiratory, sudden, acute, prior presentations, etc. Bingo!

As it turns out the pathologist was finally forced to admit that Officer Sicknick’s COD resulted from him suffering an acute basilar artery thrombosis – in other words, an acute stroke which affected the basilar artery which is a vital vessel contributing to posterior cerebral circulation. That’s as simple as I can make it right now.

Whether the pathologist located this serious on-board problem during autopsy, or during a post-mortem investigation of Officer Sicknick’s medical issues and presentations before the Capitol protests is really unimportant. What is important is that this COD was not difficult to determine within a couple of weeks after his death. Some simple questions addressed to family members and close friends he worked with would have included whether Officer Sicknick suffered from any of the risk factors normally associated with 70% of stroke victims such as hypertension, and/or comorbidities such as diabetes, coronary artery disease, or peripheral vascular disease. Was he on a blood pressure medication regimen, was he a smoker? Had he displayed any cues such as stuttering, headaches, dizziness, or gait ataxia in the days or even hours before his encounter with the protesters?

Chances are that the homicide detectives, pathologist, and the medical team investigating such a high-profile death case that was played for months in the media would have been able to ask the appropriate questions, reviewed the pathology and known what killed Officer Sicknick – and would have also known months ago that it was not the suspects they had in-custody. So why continue to advance this patently false and harmful false narrative that the hapless officer died at the hands of the Capitol protesters? Because it fits the Progressive Left’s agenda that former President Donald Trump “incited insurrectionists who killed police officers,” that’s why. And that’s just the beginning.

The Progressive Left exploited Officer Brian Sicknick’s untimely death by sacrilegiously literally placing him upon the People’s “Altar of Freedom” in the U.S. Capitol rotunda as a symbol of the evils that President Trump and We the People who really care about freedom and democracy represent.

Make no mistake of my meaning here in penning this article. Officer Brian Sicknick is as much an American hero as any law enforcement officer who dies while protecting our communities, our freedoms, and our democracy. The people who resisted police orders to vacate the area, resisted arrest and acted violently towards officers should be arrested, charged, and jailed or imprisoned. However, for the right crime(s) and reasons.

A brave officer’s real cause of death was deliberately exploited and falsified to enhance the national chaos, fear mongering and hypocritical false narratives the Progressive Left and Marxists need to physically wall off The People’s House and encircle it with thousands of heavily armed soldiers in order to quickly advance over forty dictator-like Executive Orders signed to reduce our freedoms and diminish our democracy. This should never be tolerated in any free society.

I pray for Officer Brian Sicknick’s soul and that of his family and colleague officers. I am sure that Officer Sicknick would never have allowed his death and memory to become a distraction from the truth of how he really died. I also pray that those who violently protested that day and fought against the Thin Blue Line feel the mighty weight of what is left of our American system of justice.

Ron Martinelli, Ph.D., CMI-V, is a retired police detective, a nationally recognized forensic criminologist, death investigator and law enforcement expert. Dr. Martinelli, is the author of the best-selling book, “The Truth Behind the Black Lives Matter Movement and the War on Police,” available at drronmartinelli.com.