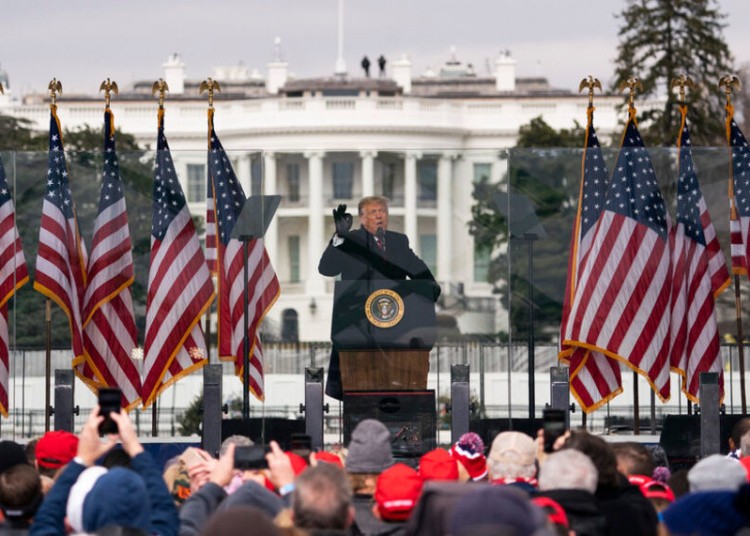 Hypocrisy seems to have taken over.

Especially since law enforcement officers across the country are being investigated and suspended for attending a political rally at the Capitol—which turned into chaos, much like so many protests that occurred last year.

Don’t get us wrong…

If any off-duty police officer participated in unlawfully breaching the Capitol or the violence outside, there’s no place for them in law enforcement. But this is clearly not the first time a peaceful protest turned into violence hours later. In fact, it just seems to be following an unfortunately well-established trend. And while there was plenty of tolerance for those who were caught up in peaceful protests that turned violent last year, it seems all that remains is hypocrisy.

Police departments across the country have suspended or flagged for internal review officers found to have participated in the Capitol riot. https://t.co/3kuWIEinTi

Last year we were told that Black Lives Matter and other groups held so-called peaceful protests across the country—even though things often turned into the kind of chaos that makes the protests at the Capitol seem like a family trip to Disneyland.

Last year, police chiefs and other police leaders even participated in the protests and marched with organizers and protesters. They had a right to do so then, and they had the same right to do so last week at the Capitol. Protests often devolved into violence last year. And tragically, the same thing happened last week—except the so-called leaders who urged tolerance of violence last year now suddenly seem intolerant this year.

We have been contacted by numerous officers who were at the rally and the protests at the Capitol last week. And it’s safe to say that the criminals who entered the Capitol were a very small fraction of the otherwise mostly peaceful crowds. This should sound quite familiar, if not like a continuing echo of everything we heard about last year.

Last summer, protests were “mostly peaceful”—even when government buildings were repeatedly attacked and protesters tried to burn them down.

But now, the media and once-upon-a-time hypocritical politicians are decrying that the events last week at the Capitol—another government building—could only be described as an “insurrection” and absolutely nothing else.

And there’s even more hypocrisy…

Last year, politicians across America—including many Washington D.C. elites—were encouraging protests. And according to their own words, it didn’t seem like many politicians wanted the protests to stop. In fact, many warned us the protests were not going to stop.

She was right: protests have not stopped, the violence has not stopped, and it’s all been happening on her watch as a political leader. Billions of dollars in damage has been done to cities across America and numerous cops have been severely injured and some have even been killed. Although it seems relatively few political leaders have anything to say about that with the exception of their trendy “resist” hashtag.

However, Kamala Harris was wrong. Something has stopped. It seems politicians and police leaders are no longer tolerant of protesters and protesting because off-duty cops—AKA citizens—are being suspended and investigated for attending what was a peaceful and constitutional political protest.

We’re not surprised by the political hypocrisy. In fact, we can only agree: the hypocrisy is not going to stop, and everyone beware, because the media and hypocritical politicians—”they’re not gonna stop.”

Admittedly, we must disagree with a growing throng of so-called political leaders. All of the violence—and the hypocrisy—that has been occurring on your watch must stop.

Seatbelts are part of the uniform