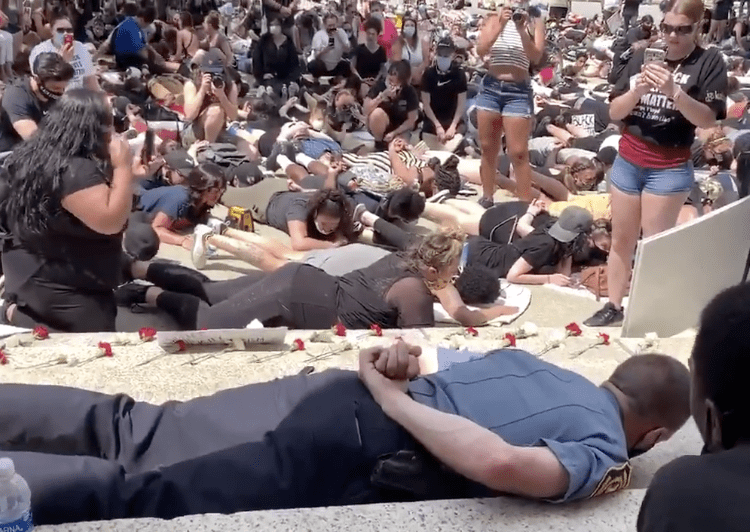 WEBSTER, Mass. — Chief Michael Shaw of the Webster Police Department in Massachusetts laid face-down on the ground at the urging of a “Black Lives Matter” protest on Saturday. The event was captured on video and posted to social media.

According to the Webster Telegram, Chief Shaw joined a crowd of several hundred demonstrators “in laying on the ground for 8 minutes while screams of ‘mama’ and ’I can’t breathe,’ the last words of George Floyd,” were yelled out.

Protests have been held nationwide, with demonstrators in several locations urging police to join them in “taking a knee.” Some have participated, while others refused.

Nevertheless, Shaw went much further. He actually prostrated his entire body on the ground, along with other protesters, as part of a “die-in” to re-enact Floyd’s death.

In an incredibly powerful moment, Police Chief Michael Shaw, urged by chanting, joins the crowd laying face down on the pavement @telegramdotcom pic.twitter.com/nkuDPeODzo

The Telegram reported the protest was organized by a local high school sophomore, Abigail Cooper, and that protesters met with the police chief beforehand to ensure the demonstration would be peaceful, safe, and orderly.

Shaw said the meeting was productive and positive.

“I was glad to be able to be a part of the planning of this,” Shaw said. “The collaboration of everyone helps lead to a safe event for them, and protects the community.”

Cooper said it is extremely important to protest peacefully. She said she does not want it to be overrun by rioting, nor does she want to inflict any damage to her neighbors.

“I know people who live in Webster and I don’t want anybody getting their homes or businesses messed up or anything because of this protest,” she said. “I’m really hoping that this is a peaceful protest. I really do not want this to be violent at all.”

The Webster Police Department reported on its Facebook page that the protest was held without incident, “with the exception of a motorcyclist failing to stop for an officer and almost hitting him.”

Cooper expressed appreciation to the police chief for holding the planning meeting, and being open-minded, the Telegram reported.

“I’m not gonna lie,” she said. “I thought we were going to have a problem and he was going to say no.”

Last week, Webster police posted on Facebook that it was “abhorred by the actions of the former Minneapolis Police Officers and how they treated George Floyd.”