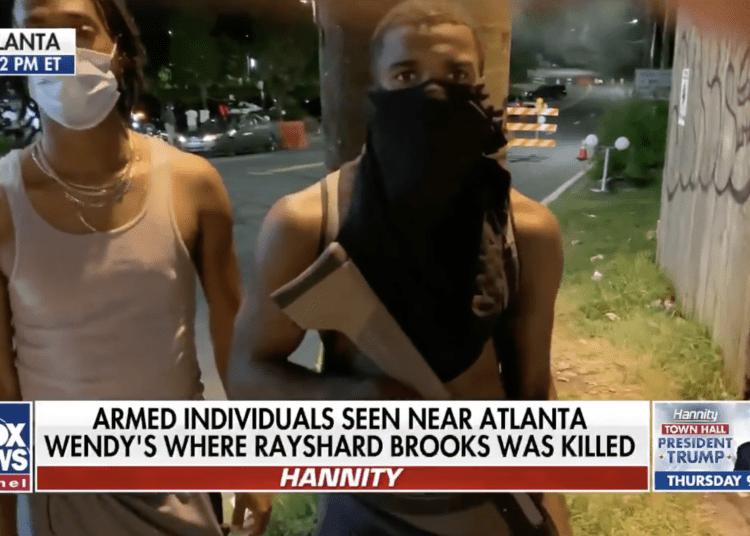 Armed protesters nears the burned down Wendy's restaurant said police are not welcome in the area.

ATLANTA — At least three men brandishing long guns — seen Tuesday night near the burned down Wendy’s restaurant in Atlanta where Rayshard Brooks was fatally shot during his arrest earlier this month — told Fox News that police were no longer allowed in the area.

One man, who identified his weapon as a 12-gauge shotgun, told reporter Steve Harrigan he was armed because there were no longer police officers to protect them.

A second individual said he lost confidence that the city’s police were committed to their pledge to “serve and protect.”

“The police aren’t allowed here because they’re not here to protect us,” the man with the shotgun said.

Harrigan told Fox News’ viewers that he observed a roadblock with no police in sight. The Atlanta Police Department issued a statement early Wednesday, “APD is monitoring the situation and plans to coordinate with community leaders and the Wendy’s property owner to address security issues and help preserve peace for this community as soon as possible.”

The police department has tried to assure residents that officers remain capable of responding to 911 calls amid a sickout that has occurred after two officers were criminally charged in the death of Brooks.

At the time of his death, police were in the process of arresting Brooks for DUI when he fought the officers, disarmed one of his Taser, and fired it at officers in his haste to escape. He was shot and killed in the process.

Brooks’ killing on June 12 set off violent protests in a city that was still reeling from protests over the May 25 custodial death of George Floyd in Minneapolis. Protesters in Atlanta said the Brooks killing was yet another example of police brutality directed at the black community. In the aftermath of Brooks’ death, the Atlanta police chief resigned, and protesters burned the Wendy’s restaurant.

Moreover, one Atlanta police officer was fired, arrested and charged with murder in connection with the death, while another officer was reassigned, pending results of an investigation.

During the field sobriety tests, Brooks is heard saying on video, “This is University Avenue. I’ve grown up here. Natalie White, she’s my girlfriend…”

It is unclear if “Natalie White” referenced by Brooks during the FSTs is the same individual arrested by authorities for arson.

A woman named Tomika Miller has been identified as Brooks’ wife, according to 11Alive.

Our GCSO Fugitive Unit's hard work paid off today when they located Natalie White today and notified US Marshals/Fulton Co Sheriff Fugitive Unit, who made the arrest. Great team effort! We appreciate @ATLFireRescue's great investigation, which led to the ID of this suspect. pic.twitter.com/i9Y1HNzhlo

The deaths of Floyd and Brooks have led to protests against perceived racial inequality. The movement has led to removal of statues and symbols as well as demands to defund police.

The lawyer for the police officer who fired the deadly shot told Fox News last week that several claims from Fulton County District Attorney Paul Howard Jr. were “not true.”

Lance LoRusso, said when his client, Garrett Rolfe, 26, fired his weapon, Brooks was not “running away.” He said Brooks “turned and offered extreme violence toward a uniformed law enforcement officer. If he was able to deploy the stun gun, it would incapacitate Officer [Garrett] Rolfe through his body armor, and at that point, if he decided to disarm another officer, he would be in possession of a firearm.”

The idea of a “police-free” zone seems to be an emerging demand among protesters. The first major aggression displayed toward police in wake of Floyd’s death was when protesters set fire to the Minneapolis police station that housed the officers involved in the deadly arrest.

Since then, calls to defund and disband entire police departments have gained traction in many Democrat run cities and circles. Rep. Ilhan Omar, D-Minn. likened police in the city to a cancer that has to be extricated.

Protesters in Seattle formed what they called CHOP — “Capitol Hill Organized Protest” — which they considered a “police-free” area in the city’s Capitol Hill neighborhood. City officials there have been criticized for being too lenient with the protesters, but two recent shootings — including one that resulted in a fatality — prompted Mayor Jenny Durkan to announce that an effort was underway to end the protest, Law Officer reported.

The armed Atlanta gunman claimed they were peaceful, although they deflected a question regarding putting down their weapons should APD respond to the area.

“It’s my legal right to bear arms,” said a protester, referring to the Second Amendment of the U.S. Constitution. “And at no point will I allow my right to be disturbed.”