What happened to transparency? 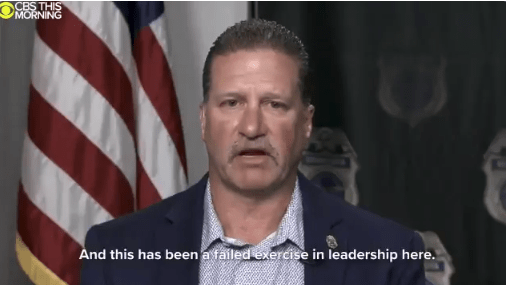 Lt. Bob Kroll, president of the Police Officers Federation of Minneapolis, said Tuesday during an interview with CBS’ Gayle King that the administration has violated policy by refusing to allow the union leaders to view body camera footage involved with the George Floyd arrest.

Floyd died on May 25, following an arrest where an officer held his knee on the neck of the 46-year-old for over eight minutes. The social media footage, surfaced online and sparked nationwide protests and riots.

According to Lt. Kroll, his team has only been allowed to see what the public has seen, barring him from being able to come forward with an “informed” decision on the arrest, particularly when it comes to the supporting officers involved, the Daily Wire reported.

“Lets talk about the incident,” King said, “I wanna know from each of you, what you thought when you saw the video of George Floyd and Officer [Derek] Chauvin.”

“That’s part of the problem, Gayle, is we were not allowed to see the video,” answered Kroll. “The administration broke our policy, which gives us the ability to see, to review the video.”

“So, we were blindsided, we only saw the social media video,” he continued. “In all other officer-involved critical incidents, we are entitled to review. What I’ve seen of it is only what the public has seen on the cellphone, and it is horrific.”

“How much more do you need to see to determine, to come out and say that this is not all right?” King pressed.

“Any human being that watched that, knows that that shouldn’t [have] ended the way that it did,” said union director Rich Walker Sr. “But we also know that there is more to the story.”

In a time when everyone is demanding transparency, it seems odd that the Minneapolis Police administration will not allow the union to view bodycam footage of the incident.

Think about it, during any other custodial death, the public is clamoring to see video if it’s available. Why is this encounter different? Although no one thinks it’s possible, the skeptical conclusion is the videos contain exculpatory details. Why else would the administration break policy by refusing to show the video to the police union? Apparently, transparency isn’t a two-way street.

Furthermore, for the first time in history the media doesn’t care about the bodycam footage. Stunning, is it not? However, the staff at Law Officer is very interested in it, and would like to know why it’s being withheld.

King, growing visibly irritated during the interview, admonished the leaders for wanting to see the bodycam footage before definitively speaking out, suggesting the social media footage was enough, reported the Daily Wire.

“We would just like to see what we are entitled to in our agreement in our policy, [which] is our officer’s body camera footage,” Kroll contended. “It might shed some light that we’re unaware of. Right now, we cannot make an informed decision about the other officers who do not appear on camera.”

AHEAD: @GayleKing speaks to Police Officer Federation of Minneapolis President Lt. Bob Kroll in his first interview since four MN police officers were charged in the death of George Floyd.

First on @CBSThisMorning, hear more from Kroll and other police union leaders. pic.twitter.com/Rx0Bfgl09X

King told the union leaders they were causing “extreme upset” to many based upon their inability to offer an opinion, even though bodycam footage was being withheld. The CBS host even accused the leaders of engaging in the so-called “blue wall of silence, again.”

“We’d love to see more,” Kroll responded, adding, “This has been a failed exercise in leadership, here. We wish we could have an early opinion in this, but it’s up to the administration to stick with policy and give us what we’re entitled to under policy.”

“It does look and sounds horrible, I completely agree with you Gayle,” the union leader added.