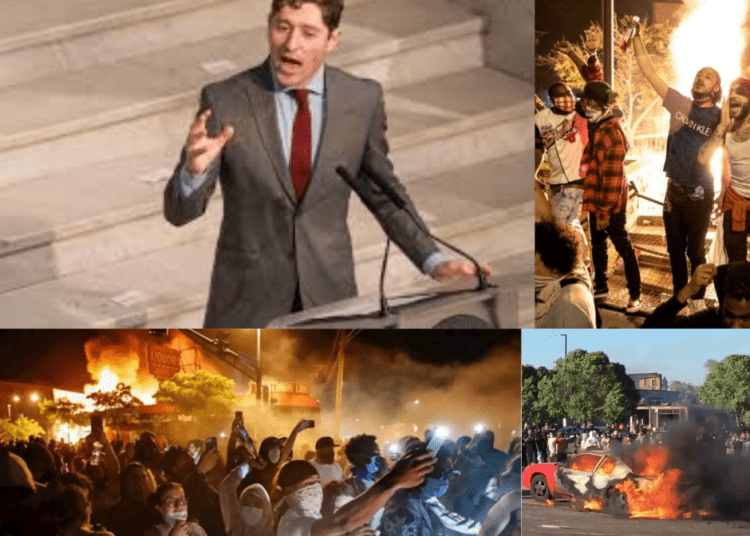 So here I am enjoying retirement in an undisclosed, secluded location. Life has been good. A few decades in the greatest job anyone could ask for and several years of getting to write my thoughts here at Law Officer and I’ve been gone a while but what I have seen in the last week has bothered me to the core.

Yes, like every other American, I’m horrified at the video that we have all seen out of Minnehopeless. Just as horrified at the murder of Justine Damond in 2017 in the same rat infested city known as democrat-ally but strangely the death of George Floyd is different.

You see there is a difference. There was little to debate in the Damond murder. She called 911 for a disturbance and when the cops showed up she approached the car to point out the disturbance and that is when Mohamed Noor, a Somali-American, reached from the passenger side and shot her dead.

There was no struggle, no words and absolutely no chance for her.

Oddly, there were no riots in the city and her name was barely mentioned across the country. The incident came and went and Noor sits in prison. Noor was a poster child for inclusion and diversity for Minnehopeless. So much so, he didn’t even go through the regular police academy. It was an “accelerated” academy we were told, all in the name of DIVERSITY.

Just like that incident, none of these details were told to the public until the media found them out and the case of George Floyd is no different with just one exception.

The Media Refuses To Find It Out!

As Minnehopeless Mayor Jacob Frey stood behind his podium last Tuesday and emotionally told us about the murder of George Floyd, he knew everything but he wasn’t going to tell you.

He knew that the neck restraint that the Minnehopeless officer used was a department approved tactic.

That’s right, Mayor Jacob Frey knew that the very technique used by the officer was the exact same one that is trained at the agency and written right in their policy manual as an approved “non-lethal” defensive tactic.

Frey also knew what the autopsy said and did not mention it. He knew the medical examiner said that Floyd had no trauma on his body. It said he did not die from strangulation and he did not die from asphyxiation. The mayor knew that the report said he died from drugs in his system along with a pre-existing heart condition combined with hypertension.

He not only knew this but until now has refused to release that video. An issue we asked him about on Twitter to which he blocked us. Does anyone really believe that if that video showed a compliant Floyd that we would not have seen it a week ago?

The mayor also knew that the officers recognized “Excited Delirium” long before the video seen around the world occurred. He knew that paramedics were called to the scene long before Floyd was placed on the ground and he knew this on Tuesday.

And if Mayor Frey is any kind of leader, he would have asked questions to know even more on Tuesday.

He would have known that the American College of Emergency Physicians’ White Paper Report on Excited Delirium, says that there is no amount of de-escalation that can be done to change the outcome of excited delirium. He would know that the report gives two demands to law enforcement when they recognize this deadly phenomenon. ….Physical restraint and subdue the subject and implement emergent sedation.

The mayor knew Tuesday that the officers had done just that. They had called paramedics and restrained the subject. This, according to the report, is the only means to “slow” the death of an individual suffering from excited delirium.

You see Mayor Jacob Frey knew all of this and he was hoping you would never know it but since Al Gore invented the internet it’s not possible to hide it and politicians like Jacob Frey must hate that.

You see, he stood up there on Tuesday knowing all of this and told you a tale.

He said this is simple. Racist cops murdered a man on camera. That is a black cop, Hispanic cop, Asian cop and a white cop made a conscious decision in front of a large crowd with cameras to lay a man down on the street and murder him by choking him to death (in the back of the neck?). Frey has convinced hundreds of millions of people that a bunch of murderous racists did this and for this they should all be outraged. An outrage that has taken it’s toll in every major American City.

Frey knew there was body camera footage that answered some of the questions we all had about the video. He knew there was a policy with the Minnehopeless Police Department that authorized the neck restraint.

He knew it all.

Instead, he chose to stoke the flames of racism and murderous cops. It was the easy play.

Rather than give America a detailed, informational look at what happened from the beginning of the encounter to that fateful end, he couched all of this as nothing but murderous racist cops and a sign of institutional racism throughout American Policing.

Rather than telling us the the truth, he decided to fan the flames of hate against law enforcement and tell the world on Tuesday that if Floyd would have been white, this would not have happened,

Of course he knows what the data says. He knows that for the last five years, according to the Washington Post Police Shooting Database, it is not blacks shot the most armed or unarmed by law enforcement but rather whites. That’s right, when it comes to unarmed individuals shot by police, it is 3% of all whites shot versus 2% of blacks.

A statistic that Lebron James must not care about since according to him, blacks are being hunted everyday.

And that brings us to one last question.

I have to ask that if Frey would have been honest and transparent, as every good democrat loves to spout about, would we be picking up the rubble today across America and preparing to fight with anarchists tonight?

Despite the lies and misinformation, the justice system works in a very strange way. Rather than emotions and half truths, when it comes to the court of law, facts are presented.

And while I quit predicting what a jury would do after O.J. Simpson was acquitted, I wonder what a jury will think when they see body camera footage of officers observing and discussing excited delirium and making a decision to do the only thing that can be done to slow the onset of death, subdue the individual and call the paramedics.

What will that jury think of Jacob Frey when they hear facts that politicians held back from the public?

What will America think when this information is revealed and wonder why their cities burned for what numerous experts will testify as a medical condition brought on by drug use, high heart rate and a struggle.

As I watch cities burning for a fourth night, I can’t help but think that we are being played but the difference in this game is it is deadly and Americans are being put at risk and for that, politicians have done much more damage than a single police officer could ever do.