DA: 'Mr. Brooks never presented himself as a threat' 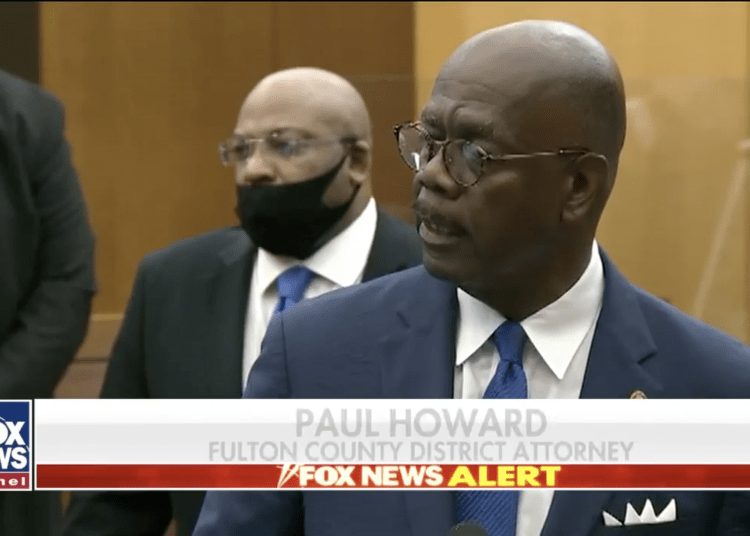 ATLANTA — The prosecutor going after the Atalanta officers involved in the fatal shooting of Rayshard Brooks spewed absurdities during a press conference on Wednesday.

The prosecutor spoke of the event as if Brooks did not initiated a brawl with the officers.

Moreover, he admits that Brooks fired the Taser at the officer, but since it went over his head the district attorney discounted the threat, completely glossing over the violent act of stealing the weapon.

Howard hypocritically uttered this non-sense after saying a few weeks ago, “A Taser is considered a deadly weapon under Georgia law.”

People wondered if Howard watched the same video as everyone else in America.

The attorney for the former Atlanta police officer facing a charge of felony murder in the shooting death of Brooks last week told “The Ingraham Angle” in an interview Wednesday that several claims made by the district attorney when he announced the charges were “not true.”

Lance LoRusso also told host Laura Ingraham that he was “kind of getting tired of people saying that Mr. Brooks was running away.

“Mr. Brooks was not running away,” he said. “Mr. Brooks turned and offered extreme violence toward a uniformed law enforcement officer. If he was able to deploy the Taser, it would incapacitate Officer [Garrett] Rolfe through his body armor, and at that point, if he decided to disarm another officer, he would be in possession of a firearm.”

Ingraham told LoRusso that Howard appeared to emphasize the early part of the encounter in which Brooks is seen speaking cordially with Rolfe — LoRusso’s client — and Devin Brosnan, rather than the violent fight with the officers in which Brooks steals one of their Tasers.

“I have no idea why [Howard] is doing that,” LoRusso said. “There’s a lot of things I have no idea [about]. He is saying one of the officers [Brosnan] is cooperating with the DA’s office. The lawyer for that officer said that’s not true.”

LoRusso also responded to Howard’s contentions that the officers did not render medical assistance to Brooks for two minutes and 12 seconds after he was shot and that Rolfe kicked Brooks as he lay dying, Fox News reported.

“My client never kicked Mr. Brooks,” the lawyer said. “If there was a video of my client kicking Mr. Brooks, you would have seen it.

“He [the DA] shows a still [where] one leg is planted and the other one’s bent. He could be leaning down to try to give him first aid, it could have been when he was trying to evaluate whether he needed handcuffs. This officer gave him CPR, monitored his pulse prior to that, talked to him to try to keep him breathing and called for EMS and coordinated other efforts on the scene.

“And the other thing the DA said was that he’s never seen another officer agree to testify against a bad officer,” LoRusso went on. “My client [Rolfe] testified against an Atlanta Police officer in the grand jury when that officer had done something wrong. So, this is an officer who’s known to the law enforcement community, he’s known to the DA’s office, and he was actually cleared of another use of force [incident] and he testified on behalf of the DA to prosecute a bad officer.”

The DA also charged Brosnan with aggravated assault and two counts of violation of oath by an officer.

When Howard briefed the press, he asked them to take note of the enhanced video. LoRusso appropriately pointed out that police officers do not have the luxury of “enhanced video,” let alone slow motion when they’re engaged in a violent encounter.

The reverberations of this prosecution are being felt by police officers around the country. It is widely viewed as malicious and motivated by race politics and driven by angry mobs taking to the streets and burning businesses, including the Wendy’s restaurant where this shooting occurred.

Furthermore, sources have also told Law Officer that charges were also filed prematurely, since the investigation is incomplete, a recurring theme involving the prosecution of police officers.

While watching Howard’s press conference, I received several texts messages from people who are otherwise apolitical on issues involving police. One in particular read, “This country has gone crazy. The cops are getting such a bad deal.”

Another said, “This country has its’ head on backwards. I can’t believe this is happening.”

Indeed, these sentiments are true. When will it stop? … Or more importantly, will it end, or have we been pulled into an inescapable vortex where lawlessness prevails and the ability of police officers to defend themselves has been subjected to analysis from individuals who’ve never encountered a violent attack.

The “objective reasonable standard of a police officer in similar circumstances” has been completely discarded by mob demands.

We train police officers to win these encounters. But there are newly developed unreasonable expectations that cops are required to lose or surrender. Why is this becoming the prevailing opinion?

In the end, this is dangerous territory.