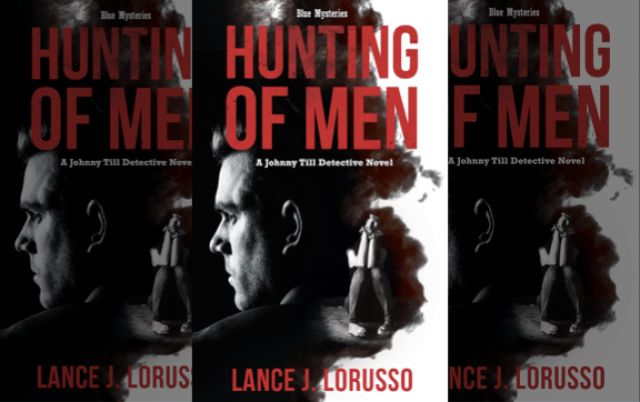 Atlanta, GA – Hunting of Men by Lance J. LoRusso launched on January 9, 2020 for worldwide distribution. The suspenseful, carefully crafted, Hunting of Men is the first in the Blue Mystery book series by LoRusso that features detective Johnny Till. The paperback edition retails for $16.99 and the Kindle edition retails for $8.99. LoRusso, a former law enforcement officer and now an attorney whose firm specializes in representing law enforcement officers is launching Hunting of Men on the 9th which is Law Enforcement Appreciation Day. In honor of Law Enforcement Appreciation Day, LoRusso’s two other fiction works,’ Kindle editions; Peacemaking and Parallax will be offered for 99 cents the week of January 5th.

“I am very excited to be launching Hunting of Men on Law Enforcement Appreciation Day,” said author Lance J. LoRusso. “This book, the first in the Blue Mystery book series was a labor of love. I strive to create for the reader what really goes on in the investigation of a cold case and the concerns, hopes, and fears law enforcement officers face daily in the real world.

“Hunting of Men will take readers on a journey unlike any they have been on before,” continued LoRusso. “Much of the book is drawn from my workings in law enforcement and also of officers I have known over the years as a cop and attorney. The book creates in a fictional world the real-life workings and dangers that law enforcement faces daily and creates a character that I believe readers will come to cherish in each succeeding book in the series.”

In Hunting of Men, LoRusso draws upon his diverse law enforcement background that saw him work the street, serve as a trainer, hostage negotiator, and an investigator. The book launches the career of central character, Johnny Till who will be the key character in all the Blue Mystery books. The book’s title, Hunting of Men, is drawn from Ernest Hemingway’s quote, “There is no hunting like the hunting of man, and those who have hunted armed men long enough and liked it, never care for anything else thereafter.” The mystery in Hunting of Men focuses upon a cold case murder.

Johnny Till is a force to be reckoned with as a new homicide detective for the Lawler County Police Department. As tradition demands, on his first day on the job, Till pulls a cold case file to investigate. The file in question is one that has haunted the department and community for years: the cold-blooded murder of Officer Michael Dunlap, gunned down in the black of night some twenty years earlier.

Now, in order to solve the murder and heal the victims left behind, Till must reopen old wounds and retrace the final days of Dunlap’s life. The journey will lead him down a rabbit hole to a darker, more sinister conspiracy, one that threatens to steal the lives of children around the world. In order to close this cold case, Till must not only come into his new role as a homicide detective, but face his own fears to truly become a hunter of men.

Lance’s other books on discount for Law Enforcement Appreciation this week include: Parallax, written to provide engaging as well as accurate entertainment,is a series of fictional stories based on the harsh realities faced by law enforcement officers in the performance of their duties and stories recounted to LoRusso by officers over the years.  Peacemaking was LoRusso’s first entry into the world of fiction, and has been described a “Christian thriller” following the journey of Officer Scotty Painter as he comes to terms with the tragedies and triumphs of his career.

Lance LoRusso is the Principal of the LoRusso Law Firm located in Atlanta, Georgia. As a civil litigator with a law enforcement background, he focuses his practice on critical incident & media response, catastrophic personal injury and wrongful death cases. A former officer, LoRusso is a strong advocate for Georgia law enforcement. He serves as General Counsel to the Georgia Fraternal Order of Police as well as Lodge Attorney for Cobb County’s Lodge 13 of the Fraternal Order of Police. Additionally, he responds to critical incidents on behalf of law enforcement officers, having represented officers in over 80 on-duty shootings. LoRusso is a highly sought-after media expert on law enforcement issues and has appeared on CNN, HLN, FOX News Channel, FOX Business Network, The Wall Street Journal, Associated Press, Christian Science Monitor, USA Today, and numerous other outlets throughout the world. LoRusso also speaks and trains on law enforcement issues. In addition to his fiction books, he is the author of two critically acclaimed non-fiction books – When Cops Kill: The Aftermath of a Critical Incident is a comprehensive study for law enforcement and family members of law enforcement officers to deal with in the aftermath of a shooting or violent alteration with a suspect; Blue News, deals with how law enforcement agencies deal with the media and public after officer-involved shootings and the dynamic that drives the news media to cover and report on critical incidents involving law enforcement.

Additional information on Lance LoRusso, Hunting of Men, and his other books may be obtained at www.lancelorussobooks.com