Overcoming physical resistance is not pretty 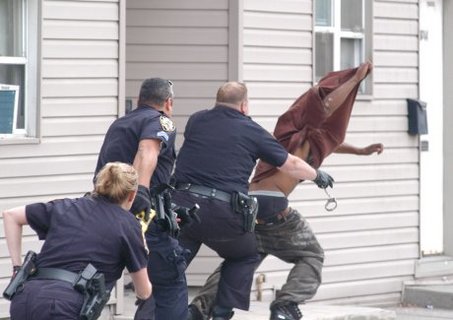 When grappling with a non-compliant person, police officers are well aware how difficult it is to apply the PERFECT level of force to turn a combative subject into a compliant one.

For the uninitiated, you need to know peace officers are trained in pain-compliance techniques. In other words, when a person chooses to resist, officers will apply lawful levels of pain until the suspect complies. This might be “taboo” to publicly discuss, but people need to be aware of its’ necessity.

The use of force is never pretty. And for “witnesses” with a limited perspective, it is often viewed as abuse, but it is not.

We train to win

The force continuum is not reality. Do not expect law enforcement authorities to apply pepper spray when someone brings a deadly weapon to the fight. We train to win. If you tie, you can die!

Sadly, American culture is nearly demanding officers sustain injury before upping the ante. All this will do is put more police officers in the hospital and the morgue. Moreover, innocent citizens are also imperil when cops delay responding to an aggressive, hostile suspect.

Force options are basic training for peace officers. For instance, verbal judo is holstered in exchange for a firearm when dealing with suspects threatening others with a knife. Furthermore, police officers do not train to end a threat by “shooting a limb.”

There are several reasons this is untenable. Imagine trying to smack a fly with a flyswatter. How many times does it take to get the fly? How much time elapses between attempts? What if the fly possessed a deadly weapon with evil intent? What if every attempt to swat the fly represented a bullet coming out of the officer’s weapon? Where did these rounds go? What did they strike?

Beyond the tactical improbability of “shooting a limb” is the goal to “stop the attack.” A simple gunshot wound to a limb does not stop the deadly threat of a suspect fueled by adrenaline or amped on drugs.

A police shooting is also muscle memory. Officers train to shoot center mass and headshots. Even with this kind of training, a majority of rounds fired by officers during tactical shootings actually miss the intended target. So further expecting “limb shots” is equally impractical and highly ineffective.

Once a suspect demonstrates action, which justifies a lethal response in order to preserve the life of another, center mass and head shots are the option.

When applying pain compliance techniques to people physically resisting, we do not feel the pain, so it can be difficult to measure the ideal dose.

The tussles and all out brawls typically look like a beating to the untrained eye, many of whom have never found themselves trying to corral a combative person.

There is simply no way to make an uncivilized event look elegant. Yet some people have this expectation.

The use of force training video below beautifully demonstrates my point. What might appear to be police brutality to some was a very well trained officer exercising fantastic technique that actually saved the life of the combatant. This could have turned into a deadly force encounter due to the violent nature of the resistance along with the exposure of the officer’s firearm:

From amateur to expert

Consider this illustration: Imagine an amateur cook entering school to be a chef. The student is given instructions to bake a soufflé. The recipe calls for 1/3-cup of sugar. Carefully, the trainee pours the ingredient right up to the appropriate line on the measuring cup, being carefully precise.

Over time, the amateur cook becomes a chef, and perhaps one day, a sous-chef. He or she has developed the skill to know exactly how much 1/3-cup of sugar is, but still uses the measuring cup to guarantee certainty due to high expectations.

No problem, right? Anyone with a steady hand can pour sugar into a measuring cup and get the right amount. But even errors require adjustment in ideal conditions. If the chef comes up short, simply add more. If there is too much, eliminate a portion.

Now let’s complicate the process. Imagine the measuring cup will not hold still. Some strange force has caused it to float and drift, so it becomes more difficult to pour sugar. Moreover, it’s not just moving, but shards of glass prick your fingers as you try to hold it still.

Suddenly, pouring 1/3-cup of sugar into the (non-compliant) measuring cup is no easy task. There will be granules that miss the cup and spill onto the counter and floor. The mess will magnify depending upon how much the measuring cup soars, the pain that is returned from the cup, and the level of experience possessed by the chef. Sugar might even contaminate another food dish nearby.

If a health inspector entered the kitchen after the process, the violations would be numerous.

Prosecute the chef for making a mess

The ingredient to bake the soufflé is now the undoing of the chef. Perhaps he or she should be cited or fined for making a mess in the kitchen?

In this illustration, the cook is a police cadet; the chef is a police officer, the sous-chef is a veteran cop, and the health inspector is the mayor/civilian oversight commission/public perception/news organizations, etc. Pouring sugar represents using force. The measuring cup is a combative subject.

The moral to the story is this; pouring 1/3-cup of sugar into a measuring cup is easy when there is no resistance. But even then it is rarely perfect without adjustments. Getting it perfect when the cup is moving and/or returning pain is no easy task, much like trying to swat a fly! If this little buzzing insect remains still, it can be accomplished. Yet that is rarely the case.

Acts of defiance lead to the use of force; and it’s not easy

Taking a combative person into custody is not easy. Even with the best intentions, people of the highest character will spill a few granules of sugar on the ground. Yet the fault should not rest with the police, but the person who resisted.

The proximate cause derived from the police, but the ultimate cause is due to the actions of the combatant. Nevertheless, the police are ALWAYS required to clean up the mess and take the blame for spilling the sugar.

We do not mind cleaning up the muddle, but it would be refreshing to hear people with influence place the blame on non-compliant suspects confronting the police with acts of defiance.