Will our national anthem be the next target of cancel culture? 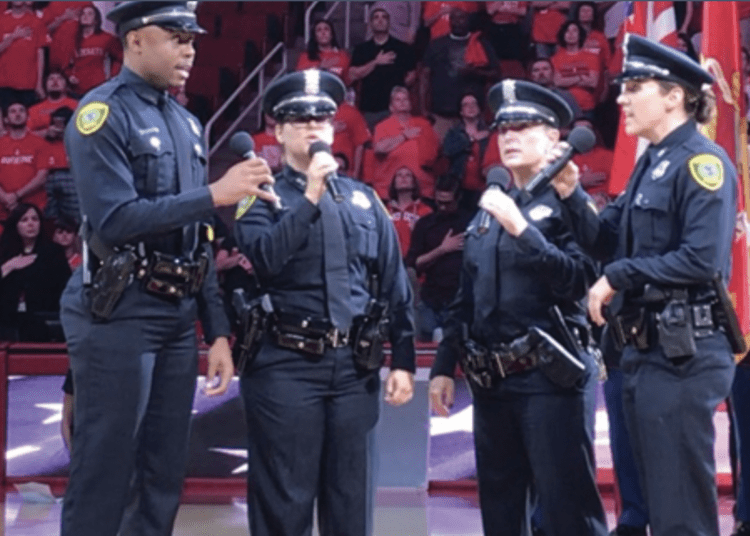 As protesters demand wholesale changes to society, monuments and statues are being ripped down and defaced, while American exceptionalism is under attack. Will the next target of extremists be our national anthem–The Star Spangled Banner?

I believe it will.

Protesters consistently show a disrespect for the American flag. Therefore, when professional sporting events resume, I fully expect a majority of athletes will be kneeling. As a matter of fact, many who didn’t kneel previously have already said they plan to take a knee.

Therefore, the next logical progression for the grievance industry is to eliminate the national anthem altogether.

Black Lives Matter has spread so many lies that our “cumulative guilt” has progressives compromising all manner of history. Sadly, most protesters consistently demonstrate their ignorance of our past based upon firmly held pre-suppositions. They simply cherry pick historical vignettes out of context and make them fit their narrative.

There is no justification for removing or desecrating tributes to men like Abraham Lincoln or U.S. Grant. By the standards being applied, protesters and history revisionists should also eliminate Martin Luther King Jr. as a man of character, since he reportedly engaged in extra-marital activity. However, that would be a monumental mistake.

“The more we categorize people groups for purposes of power, the greater chance we have for societal dysfunction.”

It isn’t my intention to disparage MLK, but revisiting “sins” of our forefathers and ignoring the progress that was made based upon their vision for a developing country is not helpful. The bitterness and anger that has been fueled by a flawed, yet an incredibly prosperous past has created a culture war with pockets of violence that will continue to cause irreparable damage; to our people, buildings, institutions, and more importantly, relationships.

The cancel culture does nothing to help progress. It simply attempts to erase history, which is a great teacher!

The more we categorize people groups for purposes of power, the greater chance we have for societal dysfunction. The real fight should be equal application of law, but that is lost in the conversation.

So, if sporting events eliminate the tradition of beginning a contest by playing/performing The Star Spangled Banner, will you attend? … I will not, and that is an exclamatory statement since I’m a rabid sports fan. However, I am also a patriot who passionately believes in our country and its’ origin, flaws and all. As a result, I anxiously wait to see how this develops.

America was not a perfect society when she was established, nor is it now. None will ever be perfect as long as flawed people are involved. But the freedom and rights afforded by our Republic and the U.S. Constitution are far superior to other models that continue to combust worldwide.

“I have an idea… For all these people who don’t want any police, I’d love to meet with American Airlines, Delta, and Southwest and make a deal to fly them to countries that don’t have police. I want them to be happy!” Walker wrote on his official fan page.

“The cancel culture does nothing to help progress. It simply attempts to erase history, which is a great teacher!”

Ironically, the rights and principles upon which we operate has allowed many professional athletes (excluding Walker) to belittle the very institutions that have brought them prosperity and fame. Some have taken their grievances all the way back to Francis Scott Key, who wrote the anthem.

Ironically, as an attorney, Mr. Key not only freed slaves decades before it became compulsory, he advocated for them in court. He actually became known as “The (N-word) lawyer,” [1] years before the Civil War settled the issue. So the advocate for chattel slaves from Africa penned the words used to reflect America’s heart. And now I fear we are about to mortally wound the traditional tune honoring America before the ball is put in play.

If I’m right, it will be a slap to the face of our nation and strikes at the values that allow people to be mutinous.

Slavery, in any historical setting, is reprehensible. Nevertheless, it has been illegal in the United States for more than 150 years. I’ve studied in detail the horrid conditions experienced by people being shipped as human cargo across the oceans for the purpose of slavery. Any sensible person should be aghast at the idea. Yet I doubt there are too many black protesters currently in the United States that can reasonably argue a better life is available at the country of origin of their victimized ancestors. Truthfully, harsh realities exist in those countries.

As a result, refining our system of justice–for victims and defendants, alike–should be the goal, not “burning the system down” like New York Black Lives Matter president Hawk Newsome threatened if demands were unmet.

Violence and the threat of violence will do nothing to solve the problem. “I just want black liberation and black sovereignty, by any means necessary,” Newsome said. Does that mean the national anthem will be next for annihilation? … Probably.