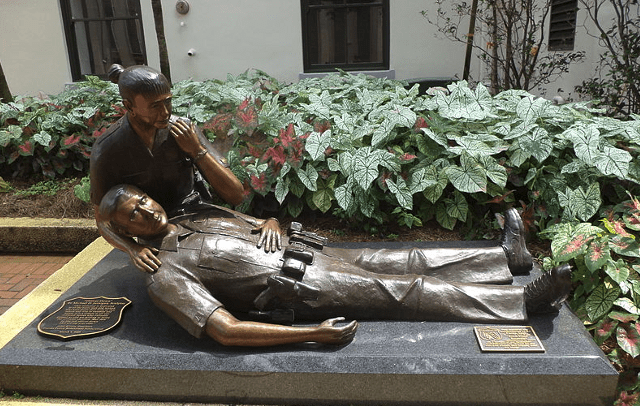 The landscape of American law enforcement is rapidly changing in the U.S. Some of it is good. Sadly, much of it is destroying the profession and will make people across the board more vulnerable.

What happens when the sheepdog is killed?

The lambs are slaughtered by wolves.

If that illustration is “too blue,” consider this. When a schoolyard bully pushes a vulnerable kid to the ground demanding his milk money (or iPhone), and a courageous person intercedes on behalf of the kid being bullied, he is safe.

But when the victim and many of his friends do not recognize the danger and vulnerabilities of being pushed around by bullies, and even scorn the brave interceding individual, the hero in our tale might say, “Have it your way,” as he or she departs.

That is what’s happening in America. Never in 39 years of working with men and women in blue have I heard a uniform voice of professionals ready to throw in the towel due to ongoing, caustic attacks.

Moreover, as we’ve recently seen in Oklahoma, Atlanta, and Kansas City, police officers have become more vulnerable than ever to criminal prosecution when engaging suspects in an act of deadly force. Never mind that shootings are precipitated by individuals in violation of law. That always gets lost in the narrative.

The future of American law enforcement is going to look vastly different.

My heart is broken as I watch violent, chaotic militants destroy the foundation of our nation and re-shape the future. I don’t know how it ends, but the monumental changes being demanded, and made overall, will not be in the best interest of America. We are not witnessing a Revolution, but anarchy. As we reinforce—through passivity—this behavior, we can expect it to repeat itself every time a radical group doesn’t get their way.

Because they are allowed to violently pursue their agenda, but police officers are being told to keep the peace without hurting or offending anyone. Folks, it’s unachievable!

George Rodman, a retired member of Louisville Metro Police Department, spoke at a rally earlier this week calling for the resignation of their passive mayor who is allowing riotous behavior to go unchecked. Rodman articulated that police have the same common goals as most peaceful protesters.

However, cops know that appeasement of violence does not lead to peace, it simply empowers more criminal acts. That is the message LMPD officers tried to project to their passive leader.

“Mayor Fischer told the officers not to engage the rioters. Downtown looks like a war zone,” Rodman said.

An Austin police officer told me that local peaceful protests were hijacked by militant out-of-towners, which changed the entire dynamics.

Radicals are throwing a nationwide temper tantrum, and the adults in the room have been told to “sit down and shut up.” Shamefully, too many passive leaders are complying as the pressure builds to criminalize the acts of police officers using force.

Sheepdogs are being told how to perform their duty by hyenas and jackals with no industry expertise, while lambs are being slaughtered. What other profession is subjected to this kind of ignorance?

Think about it for a minute, physicians kill far more people annually through negligence and malpractice than police officers, yet they are quietly “policed” by the State Medical Board—no body cams or civilian review board for them. Lawyers destroy more lives through unethical behavior than police would ever consider, yet they are kept in line by the State Bar Association. Again, no body cams or civilian review board.

Sadly, the conversation has gone way beyond civilian review boards. Total abolishment or defunding of police departments are the topics du jour. Excuse me, but my head is spinning at the ludicrous suggestion. Even far left Mayor Jacob Frey doesn’t agree with that one.

Consequently, a difficult job is becoming nearly impossible as members of law enforcement are also being harshly punished and prosecuted for trying to hold the line.

Standby, the dam is about to burst if America continues down the path that rewards lawlessness and kills the sheepdog.