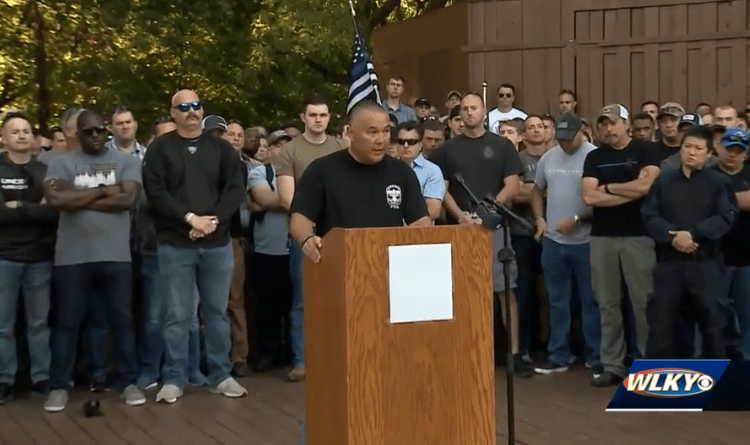 LOUISVILLE, Ky. — George Rodman, a retired member of the Louisville Metropolitan Police Department, stood in front of hundreds of officers Tuesday at Central Park. His message was clear and concise. He said the men and women, the majority who have worked 20 out of the last 23 days, were mentally and physically exhausted.

The officers, who have stood on the front lines for weeks, he said were ready and deserving of change, WLKY reported.

Rodman and others are calling for the resignation of Mayor Greg Fischer. They believe his leadership has led to plummeting morale among officers amid his alleged directives to stand down and not engage rioters.

“Mayor Fischer told the officers not to engage the rioters. Downtown looks like a war zone,” Rodman said.

Moreover, FOP leadership was rather blunt when referring to the mayor’s leadership as an “epic failure.” They estimate 200 officers will leave the department by the end of summer.

“We’re going to be severely understaffed and we will not be able to provide the basic needs of safety,” Ryan Nichols, President of the FOP River City Lodge, said.

“Crime is going to explode over the next 12-24 months and who are you going to turn to? The officers you turned your back on?” Todd Kessinger, retired LMPD said.

Consequently, Rodman said change must be made immediately and it begins with a new mayor.

“If you’re not willing to take our city back step aside, stand down. Retreat. I will lead them because that’s how much I believe in them,” he said.

Fischer later responded to this by saying stand-down orders were coming from LMPD’s acting chief Rob Schroeder and the command staff, and acknowledged police were in a difficult position.

Disrespect for Fischer runs deep. Earlier this month video captured police officers walking out on the mayor when he arrived to address them, shortly after terminating then police chief, Steve Conrad.