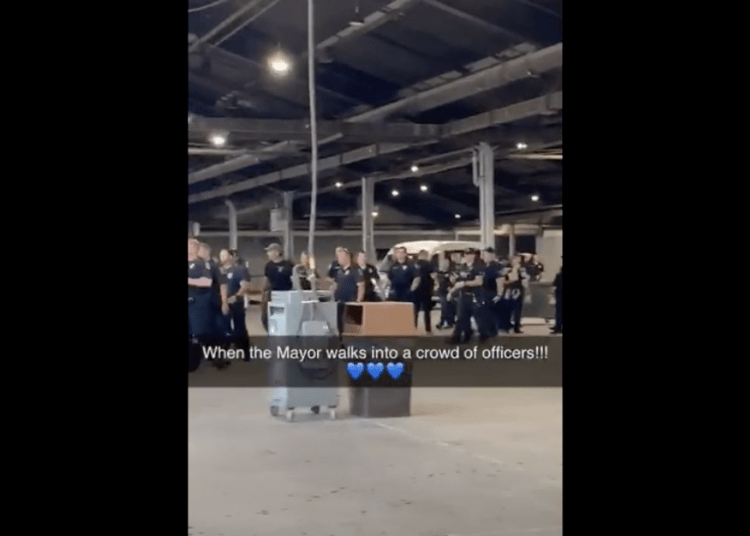 LOUISVILLE, Ky.  — Louisville Metro police officers organized a protest of their own Wednesday by walking out on Louisville Mayor Greg Fischer.

Video showed hundreds of LMPD officers walking out when Fischer arrived to address them, WAVE reported.

This happened Wednesday during roll call, as about 200 officers were getting ready for their 12-hour shifts.

The Fraternal Order of Police President Ryan Nichols told WAVE 3 News that officers do not feel supported by Fischer as they try to protect the citizens and the city from violence and looting.

“The Mayor is the leader of our city including this police department,” Nichols said. “For this to be the first time he’s tried to address his officers who have been working in these extremely treacherous conditions after he has made numerous attempts to address other entities, they feel completely disrespected and unsupported by him.”

Several officers there told local reporters the walkout was not planned.

The walkout came two days Mayor Fischer announced the firing of the city’s police chief after learning that two officers involved in the fatal shooting of a black business owner had not activated their body cameras, Law Officer reported.

“This type of institutional failure will not be tolerated. Accordingly, I have relieved Steve Conrad of his duties as chief of Louisville Metro Police Department,” Fischer said during Monday’s news conference.

It’s unknown if the walkout was connected to the chief’s dismissal.

“The men and women of LMPD are putting in long hours. They are suffering insults and assaults from people they are working to protect. They are worried for their families and this city. They are frustrated, and some of them expressed that frustration today. I absolutely respect that. That doesn’t change my appreciation of the work they are doing, as I’ve expressed time and again. They have a very difficult job. I hope our residents will embrace our police officers as guardians –I know that’s how the vast, vast majority view their role.”