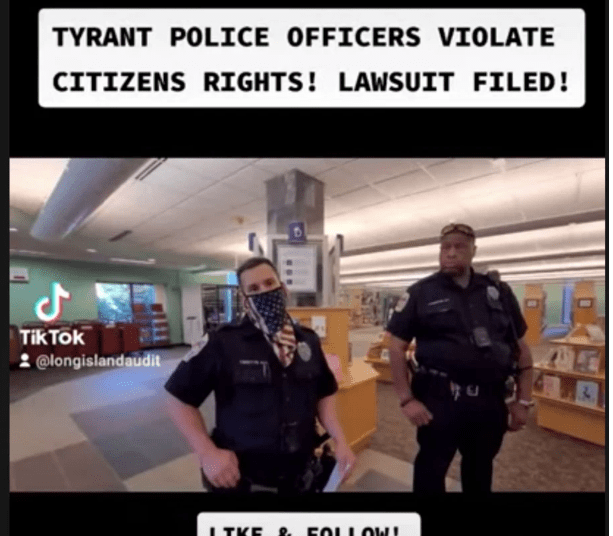 If you wondered where “Cop Block” went, we may have found their distant cousins. The New York Post recently reported on a group of “First Amendment auditors” that are making large sums of cash by posting videos on YouTube as they harass law enforcement..or as they describe it, a “constitutional activist.”

With clicks and money as a motive, they do what they can to get reactions from law enforcement.

That includes Sean-Paul Reyes, who claims he made $8000 his first month. One of his videos came at the expense of the Danbury (CT) police when he went to the public library and filmed. An act that is prohibited in that city for privacy reasons.

When law enforcement was called, the camera started rolling.

Reyes refused to leave and his confrontation with the police garnered him over 17,000 views.

“Dude, why you gotta be such a tyrant?” Reyes asks a masked officer inside the library as the cop mocks him.  “Don’t touch me!” he yells at police during the 21-second video.

“I felt their anger,” he told his followers. “They wanted nothing more than to put me in cuffs and lock me away.”

The video prompted an internal affairs investigation. The case is pending.

Jason Gutterman may be the most successful in this new business. With 271,000 subscribers, he has travelled to 32 states and claims to make as much as $30,000 in a month.

YouTube clicks aren’t the only way auditors rake it in. Gutterman reportedly garnered a $9,500 legal settlement from the town of Silverthorne, Colorado after he refused police orders to leave the U.S. Post Office where he was filming and threatened to sue.

You can read the full article in The New York Post.