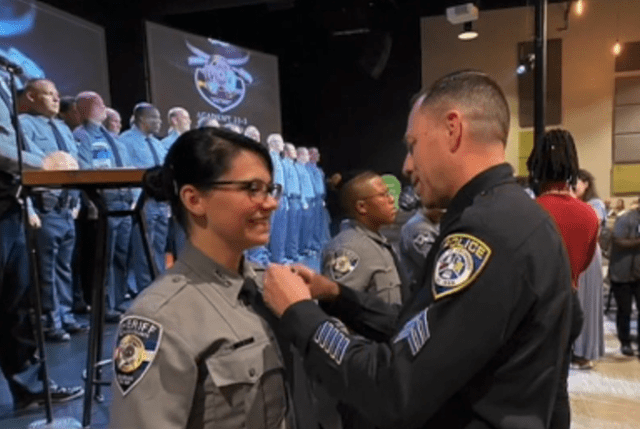 SAN DIEGO, Calif. – A police officer in California saved the life of a 6-week-old baby girl back in 2000. On Monday, that infant began her career in law enforcement and experienced the surprise of a lifetime when she was able to meet the officer at her academy graduation.

Natalie Young, the academy graduate, not only met the man who saved her life, but he pinned her badge on her at the emotional graduation ceremony.

“My mom sat me down…she was like, I found the officer that saved your life,” said Natalie Young. “When I tell you I couldn’t even speak. He’s coming to my graduation? She said he’s going to pin the badge on you!”

Natalie and her parents, Jeff and Shelley Young, shared the incredible story with 10News San Diego.

For years Natalie knew a police officer had saved her as a baby. As a result of his heroic actions, she always wanted to pursue a career in law enforcement. She mentioned to her mother that she wished there was a way she could show her gratitude to the officer that saved her.

Shelley Young works in dispatch, so she began digging around. After making several calls, she connected with Sgt. Jeff Valdivia, who still works with the Escondido Police Department in Southern California.

Valdivia says he still remembers the day 22 years ago when he responded to a residence in Escondido and found baby Natalie on a bed with a meth pipe nearby.

Natalie was removed from the home and placed in protective custody. She was later adopted by the Young’s.

“Personally, I feel blessed just to have found out what happened to her,” Valdivia told 10News.

“She was underweight…and of course the house was a mess,” he recalled.

Fast forward to this year, Natalie and the sergeant had an unexpected reunion.

“I could never re-experience that feeling,” said Natalie, describing the moment she was able to catch up with Valdivia and thank him in-person, right before he pinned her badge at her graduation ceremony.

“The whole time I was holding back tears at graduation. I couldn’t stop smiling,” she said.

“Just being invited to her graduation was a huge honor but being asked to pin her badge on was definitely a career highlight for me. You can just tell she cares about people. She’s gonna make a great cop.”

Although Natalie lives in Colorado, the two plan to remain in touch.