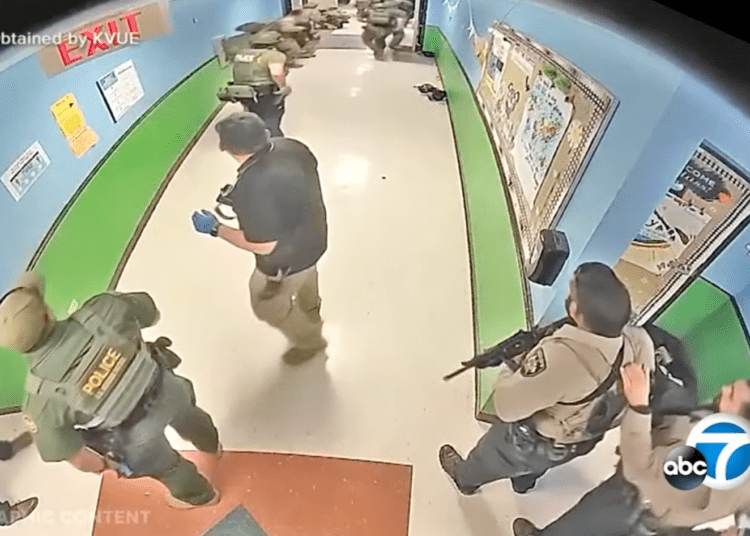 UVALDE, Texas – The Uvalde Consolidated Independent School District announced Friday the extraordinary move that it suspended its entire police force amid continuing fallout over officers’ failed response to the mass shooting at Robb Elementary in May that left two teachers and 19 students dead, according to a reports.

“Recent developments have uncovered additional concerns with department operations,” the school district said in a statement. “As a result of the recent developments, Lt. Miguel Hernandez and Ken Mueller have been placed on administrative leave, and the District has made the decision to suspend all activities of the Uvalde CISD Police Department for a period of time. Officers currently employed will fill other roles in the district.”

Meanwhile, the Texas Department of Public Safety is responding to requests from the district to be stationed on school campuses and provide security at extra-curricular activities, according to the statement, NBC DFW reported.

“We are confident that staff and student safety will not be compromised during this transition,” the school district said.

The timeframe of the suspensions remains unclear as the grieving Texas town seems determined to punish officers for hesitating more than 70 minutes to confront the 18-year-old gunman in the fourth-grade classroom.

Most notably, Arredondo was harshly criticized for not ordering officers to act sooner as he tried to deflect responsibility in the aftermath, claiming he didn’t know he was the incident commander.

The suspensions also come on the heels of the recent hiring and immediate firing of a school district police officer after it became public that she was one of the first state troopers to arrive at Robb Elementary in May, reported The Texas Tribune.

Crimson Elizondo is among at least five current or former Department of Public Safety officers the agency is investigating for their response to the deadliest school shooting in Texas history, CNN reported Wednesday.

Elizondo, who responded to the shooting within minutes when she was employed as a state trooper, was subsequently hired as a lateral by the school district’s police department after leaving DPS.

Gov. Greg Abbott on Thursday told reporters that the school district asked DPS about Elizondo. Abbott said the agency advised school officials that “she had actions inconsistent with training and department requirements.”