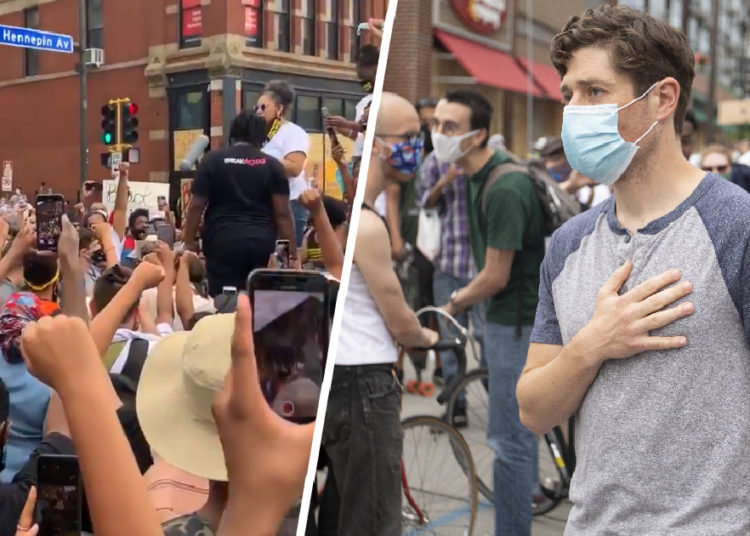 You’d be hard pressed to find anyone more “woke” and dedicated to the cause than Minneapolis Mayor Jacob Frey.

But he found out where that got him recently when he attended a “defund the police” rally that turned into an “abolish” the police rally.

“I need to come to grips with my own brokenness in this situation, my own failures, my own shortcomings…” Frey told the moderator.

“The systemic racist system needs to be revamped. The police union needs to be put it it’s place.”

Another moderator interrupted him as he stood below as he looked up at the new gods of Minneapolis.

“Fist up Ya’ll,” the moderator said.

She continued, “Jacob Frey, we have a yes or no question for you…..yes or no, will you commit to abolishing the Minneapolis Police Department?”

“WE DONT WANT NO MORE POLICE!”

“If you don’t know, he’s up for re-election next year and if he says no, guess what the fuck we gonna do next year,” she said.

Frey, in an honest moment of clarity responded with “I cannot support the abolition of the police department.”

And the crowd erupted as the moderator said, “Get the fuck out of here.”

Listen, we have been hard on Frey and it wasn’t just during this incident but at the end of the day, he seems like a nice guy. He certainly is attractive….but nice guy or not, the politics that Frey plays placed him right here today having to answer that question.

When you negotiate with crazy people, you just shouldn’t be surprised when crazy people turn on you.