The Students Were Also Offended By A 'Bass Pro' Hat 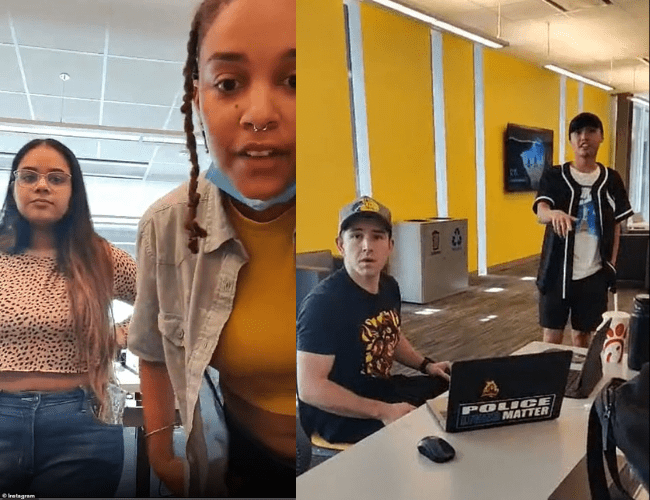 In a viral video in September 2021, two Arizona State women filmed themselves verbally attacking two white men who they claim were taunting them by wearing an anti-Biden shirt, toting a Chick-Fil-A cup, and using a laptop with a pro-police sticker.  Both groups were studying in the multi-cultural center at the University, Law Officer reported at the time.

The footage begins with the white students sitting at a table studying before they are approached by two activists who state: ‘You’re offensive. Police Lives Matter? This is our space. You’re making this space uncomfortable.’

The two activists, tell the white students they must leave, saying: ‘You’re white. Do you understand what a multicultural space means? It means you’re not being centered.’

‘White’s not a culture?’ one of the white students subsequently asks.

‘White is NOT a culture! You think whiteness is a culture? This is the violence that ASU [Arizona State University] does and this is the type of people that they protect!’ one of the activists responds.

‘This white man thinks he can take up our space … they think they can get away with this s**t!’ she continues yelling.

In their video, the pair could be heard harassing the white students screaming at them , describing their choice of study location in the multicultural center as ‘peak white cis male bulls**t.’

‘This is the only place on campus that does not center you, and you are still trying to center yourself which is peak white cis male bulls**t,’ the pair declared.

‘I’m not racist, I’m just studying,’ one of the students replies. ‘I pay the same f**king tuition as you. I’m working 60 hours a week while going to school because my parents don’t just give me money!’

The activists continue to protest the Police Lives Matter sticker on one of their laptops, saying it is ‘affiliated with white nationalists’.

‘These people kill people like me and like us, so you’re promoting our murderers,’ the pair state.

The white students are then defended by an Asian peer, but the clash continues.

The pair eventually left the ‘multicultural learning space’ noting that they were going to  complain to the dean.

We may have never known what happened next but thanks to the women filming a nine minute video complaining about their discipline by the University, we now know.

The students were charged with ‘interfering with or disrupting university or university-sponsored activities,’ according to Campus Reform.

The Daily Mail reports that Mastaani Qureshi, an undergraduate and Sarra Tekola a graduate student posted a video on social media alleging ASU had carried out an investigation into their actions and called for them to write a three-page paper.

In the video, Qureshi and Tekola claim the investigation into their actions was ‘racially biased’ adding they were ‘forced to confront these men’, because, in their view, the ASU faculty allegedly refused to answer their cries for help.

‘Dear White People, A.K.A. ASU — You openly discriminated against us on November 16 when you handed down your decision from your racially biased investigation,’ Qureshi said.

‘We’re being persecuted for defending our multicultural center from racism and sexism … ASU is a violent place.’

The students condemned being ordered to write up how ‘next time, when they talk with white people about race and society they will be civil’  and to reflect on how they might deal with a similar situation in the future and ‘facilitate a civil dialogue’ about the purposes of a multicultural space.

In its ruling the university wrote that to the pair that it  ‘expects that such dialogues will be both respectful toward other parties and mindful of the setting in which they occur. ‘

‘In this instance, the confrontation captured on video was not respectful dialogue, and its heated nature in an enclosed space where numerous other students were studying caused disruption to their activities as well as to the previously quiet study activities of the students who you confronted.’

Despite their penalty, it was clear in the pairs response on Instagram that they did not agree with the findings and they are unlikely to write a paper on how they might respond in the future.

‘ASU does not recognize the difference between equity and equality and refuses to center the most marginalized,’ Tekola ranted. Equality means offering everyone the same opportunity, while equity – which has been co-opted by woke campaigners in recent years – means ensuring everyone achieves the same outcome.

Tekola then spoke up arguing asking ‘students of color’ to be more civil in the face of alleged ‘white supremacy and neo-Nazism’ is ‘actually violent.’

The pair also claim to have been on the receiving end of ‘rape, death and lynching threats’ on social media and are now suffering from ’emotional and psychological violence’ since their first video went viral.

Qureshi and Tekola concluded their video by asserting ASU to be number one at ‘ignoring marginalized students.’

‘ASU refuses to protect students of color, and the world needs to know how they treat us here on this campus when we push to make it a better place for all,’ Tekola said in a statement.

Tekola and Qureshi are ASU students and organizers of the Multicultural Solidarity Coalition, a student-run organization not affiliated with the University.