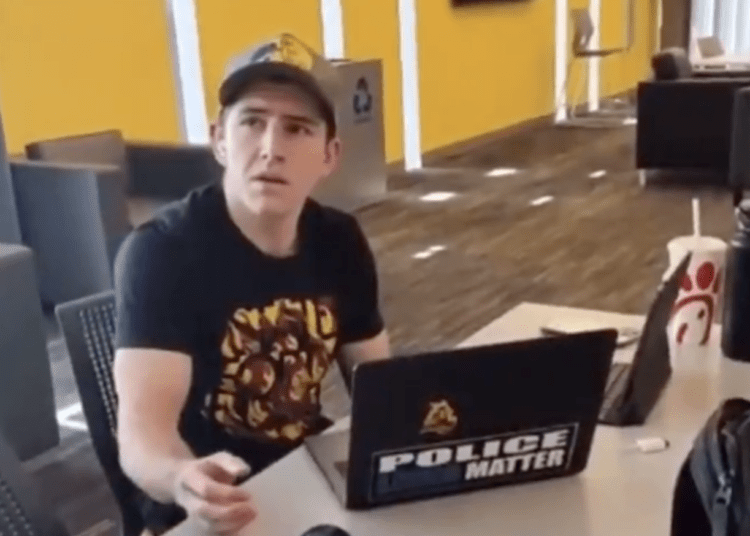 TEMPE, Ariz. — Racist haters targeted two male white students reportedly at Arizona State University’s campus as they were studying due to a sticker on a computer reading “Police Lives Matter.” The intolerant group demanded the students leave the area, according to a viral video of the encounter.

🚨 This insanity is happening on college campuses pic.twitter.com/BrVxICZYqP

The two male students are studying at a desk in an area on campus when the female behind the camera begins her tirade about a “multicultural space.”

A sticker that reads “Police Lives Matter” is on the computer of one student, while the other is wearing a shirt that says, “Did Not Vote For Biden.”

“We’ve got a Police Lives Matter sticker and we’re getting kicked out. Can’t do school,” the student wearing the anti-Biden shirt says as he also holds up his phone, appearing to record the confrontational accusers.

“You’re white, do you understand what a multicultural space is? It means you’re not being centered,” the students filming tell the white students.

“White’s not a culture?” the student in the anti-Biden shirt says, Fox reported.

“White is not a culture, say it again to the camera, you think whiteness is a culture.”

“This is the violence that ASU does and this is the type of people that they protect. Okay, this white man thinks he can take up our space. And this is why we need a multicultural space, because they think they can get away with this s–t,” the female continues, appearing to refer to Arizona State University.

ASU did not immediately respond to Fox News’s multiple requests for comment on the video.

This is an example of what happens when politicians and movements weaponize race and encourage tribalism since the only “offenses” committed by the students were being white and supporting police.

“This is racism & harassment. The school should punish the girls who did this. Racism towards any skin color is wrong & shouldn’t be tolerated ever. ALL lives matter. Supporting police mean you support police & the important job they do to keep communities safe & enforce laws,” Republican Rep. Marjorie Taylor Greene tweeted in response.

This is racism & harassment.
The school should punish the girls who did this.
Racism towards any skin color is wrong & shouldn’t be tolerated ever.
ALL lives matter.
Supporting police mean you support police & the important job they do to keep communities safe & enforce laws. https://t.co/eGEuXAbCbg

The recording has received fierce pushback on social media from people who say it is an example of “racism & harassment” against the two white male students.

Who is this person attacking people because they are white? What school is she a product of? What community allowed her to be educated this way? Who are her parents?

They all failed her. https://t.co/qlnr3hZMhz

It is indeed. But some of us stay sane! And we think we’re in the majority.

It's anti-white activism and it can make you an internet celebrity, earn you book deals, and earned media appearances. https://t.co/qSUaTNJGWq

The kids harassing these two young men should be expelled from college.