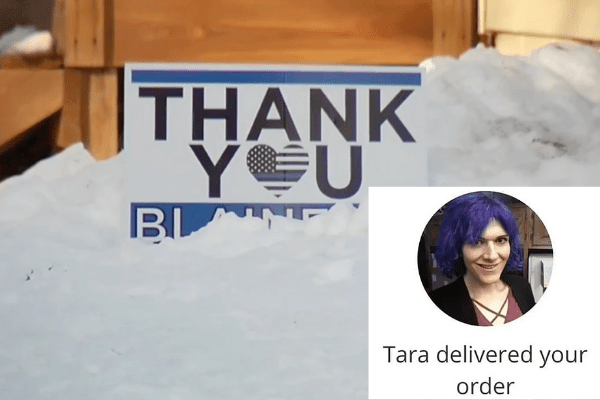 Blain, Minnesota – An enraged Instacart driver ran over an elderly couple’s groceries after she delivered them and called police “racist pigs” on the receipt — because she saw a Blue Lives Matter flag in their driveway, police said.

The residents placed a grocery order from a local Cub Foods on December 6th and requested delivery via the Instacart delivery service, the Blaine Police Department said in a statement.

They stepped outside to meet the driver because they were worried the woman — identified as 36-year-old Tara Olivia Plum — might get stuck in their snowbound driveway, police said

As the couple stepped outside, the purple-haired suspect yelled at them to check the Christmas wreath on their front door, where they discovered the offensive holiday message about law enforcement scrawled on their order receipt, police said.

The couple then realized that their $50 in groceries also had been run over.

Police Chief Brian Podany said Plum was reacting to the couple’s sign that read, “Thank you Blaine P.D,” according to the New York Post.

Plum was cited for criminal damage to property. If found guilty, she could face up to 90 days in jail according to Captain Mark Boerboom.

Instacart has issued the couple a full refund.