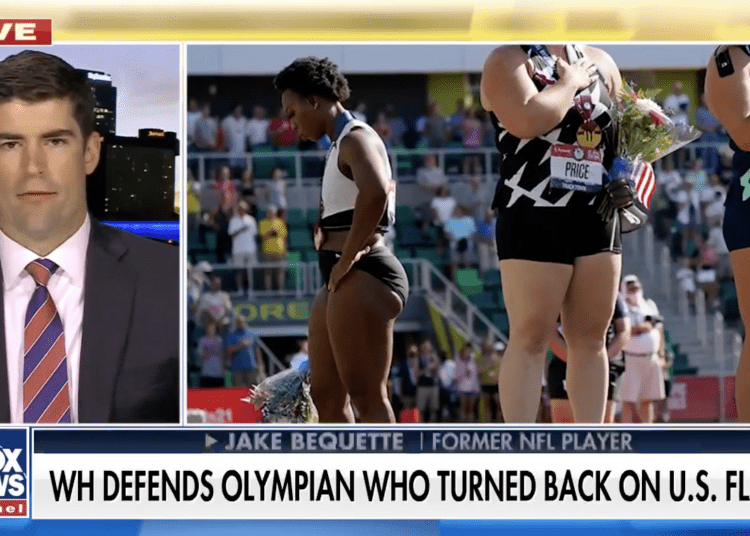 A former NFL player who became an Army Ranger when his playing days ended said an Olympic athlete disrespecting our national anthem and the American flag should “go compete somewhere else.”

“I was very blessed to be able to play football for the University of Arkansas and for the New England Patriots. And standing there on the sideline before a game watching that flag wave and the national anthem play always filled me with pride,” the former Army Ranger told Brian Kilmeade.

The defensive end out of the University of Arkansas was selected in the third round of the 2012 NFL Draft by the New England Patriots. After playing pro football for three years, he joined the Army and became a member of the 101st Airborne Division.

“And wearing that flag on my shoulder serving in Iraq with the 101st Airborne Division was the greatest honor of my life,” Bequette said.

Berry placed third in the hammer throw during the U.S. Olympic trials in Oregon. As a result, she is now an Olympian, earning her spot on the team. However, she apparently has disdain for “her team” as she turned her back on the flag and draped a shirt over her head during the playing of the National Anthem.

Bequette concluded, “It makes me very upset to see some athletes and even President Biden blatantly disrespecting our flag and the great country that flag stands for. So if Gwen Berry wants to you know, if she hates this country so much. Then she should quit the U.S. Olympic team and go compete somewhere else.”

Jen Psaki, the White House press secretary defended Berry’s decision to disrespect the flag, saying the 31-year-old athlete was seeking to “peacefully protest” the moments that Americans “haven’t lived up to our highest ideals.”

Psaki was challenged by Peter Doocy of Fox News.

“This weekend, Gwen Berry, who hopes to represent the United States as an Olympian on the hammer throwing events, won a bronze medal at the trials, and then she turned her back on the flag while the anthem played,” Doocy said to Psaki during the daily White House briefing. “Does President Biden think that is appropriate behavior for someone who hopes to represent Team USA?”

Psaki proceeded to dodge the question.

“Well, Peter, I — I haven’t spoken to the President specifically about this, but I know he’s incredibly proud to be an American and has great respect for the anthem and all that it represents, especially for our men and women serving in uniform all around the world,” she replied, without answering Doocy’s question.