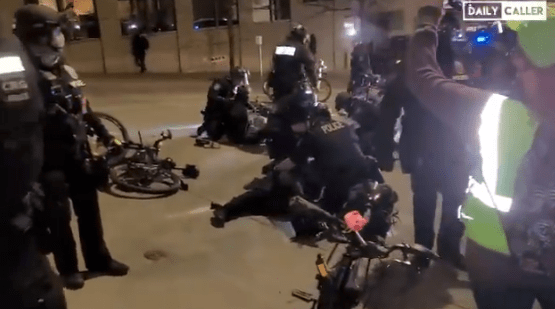 Major cities on the West Coast were among those seeing riots and protests Saturday night as demonstrators marked the one-year anniversary of Breonna Taylor’s death in a police raid in Louisville, Kentucky.

Taylor was killed as police returned gunfire from her boyfriend.

Los Angeles, Seattle and Portland all saw clashes between crowds and police, with numerous arrests being made, Fox News reported.

In Los Angeles, some demonstrators smashed store windows and threw rocks at police officers in Hollywood.

Social media videos showed police officers in riot gear near the intersection of Hollywood Boulevard and Vine Street near the Hollywood Walk of Fame. One social media video showed a protester jumping on a police cruiser as it sped away.

At least one officer was injured in the clashes, police said, according to an on-air report from KNBC-TV in Los Angeles. The officer’s condition was not reported.

It was unclear if any protesters were injured.

Breaking: Multiple stores have been vandalized in Hollywood, California, during protests on the one-year anniversary of Breonna Taylor’s death. pic.twitter.com/tXybRel3JV

Bed Bath and Beyond, a CVS pharmacy and an Asian restaurant were among the businesses vandalized by rioters, according to KNBC and social media videos.

Police did not immediately report if any protesters have been arrested.

In one video, police on bicycles are seen making arrests, while another video showed police in a van as they followed a group of marchers, Fox reported.

Sliding door open on the moving police van (that also has a smiley face in the back window) as officers follow the crowd through downtown Seattle #Seattle #SeattleProtests #SeattlePolice pic.twitter.com/zWgTNbxIDP

Earlier, a violent clash broke out as police used pepper spray while moving in against a crowd.

A downtown Starbucks shop was seen with smashed windows and spray-painted messages on the outside.

Protestors spray paint and chip at the windows of a Starbucks. #antifa #Seattle #BreonnaTaylor #BLM pic.twitter.com/AA9Gb9sBpk

Police were also monitoring a group that they believed had been dragging construction signs and other items into the street in an apparent bid to block vehicles.

The Seattle Police Department tweets about 4 a.m. Saturday ET that they had made 13 arrests.

Police arrested a total of 13 suspects related to this demonstration. A blotter post with more information will be added to this thread tomorrow morning.

In Portland, a federal courthouse in the downtown area appeared to be the main staging area for another faceoff with authorities, according to local reports.

In Portland, #antifa returned to occupy the front of the federal courthouse they tried burning down again this week. They blocked the streets to create a “no go zone” for the public & police. #PortlandRiots pic.twitter.com/5y3RWwAzWp

Just one night earlier, police had made 13 arrests and “kettled” about 100 demonstrators before allowing them to leave one by one, Fox reported.

Last week’s protests outside the courthouse came soon after authorities removed a barrier that had been in place outside the building.

One Antifa activist was arrested for riot-related offenses twice in the same day, Law Officer reported.

On Saturday night and into Sunday morning, new messages were seen spray-painted outside the courthouse, including, “Police are murderers.”

Louisville saw numerous violent protests and rioting last year following the Breonna Taylor incident on March 13, 2020. Police had obtained a narcotics related search warrant for her apartment. After knock and notice was provided, police made entry only to be met with gunfire from Taylor’s boyfriend, Kenneth Walker. Sgt. Jonathan Mattingly was shot in the leg. During the gun battle, Taylor was killed in the crossfire.

Earlier this month prosecutors decided to forego charges against Walker, Law Officer reported. Mattingly filed a lawsuit against Walker last October. He alleges that the shot was “outrageous, intolerable and offends all accepted standards of decency or morality.”