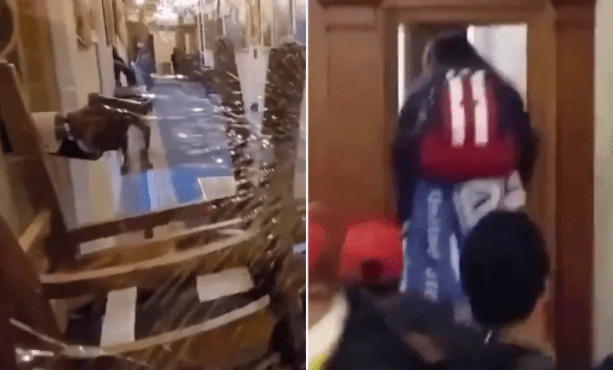 WASHINGTON — These disturbing videos capture the moment US Air Force veteran and President Trump supporter Ashli Babbitt was fatally shot during Wednesday’s assault on the US Capitol building.

Babbitt, 35, was among several supporters of the president who overwhelmed police and breached the US Capitol in an attempt to disrupt the certification of the 2020 presidential election in favor of Joe Biden.

The 45-second clip posted to Twitter opens with several rioters attempting to break down a door in the halls of the Capitol, barricaded against the invaders with furniture.

Through the door’s shattered windows, a single law enforcement officer can be seen, his service weapon raised and trained on the horde outside, New York Post reported.

“Bust it down!” one man yelled from the crowd.

About nine seconds in, the officer stepped forward and fired a single shot, striking Babbitt, who, another video clearly shows, was attempting to climb through a blown-out window pane in a panel beside the door.

Babbitt fell backward, landing motionless on the Capitol floor as her fellow rioters screamed and backed away from the window.

A squad of law enforcement officers, clad in riot gear and toting long guns, came up a flight of stairs behind the chaos and ordered the rioters to back up.

One man knelt over Babbitt, attempting to tend to her wound as blood pooled around her mouth.

He called for a medic shortly before the video cut out, The Post reported.

Her death was one of four on the day of Beltway bedlam, with police saying another three people died from various “medical emergencies,” Law Officer reported.

“When they broke the glass in the back, the [police] lieutenant that was there, him and I already had multiple conversations prior to this, and he didn’t have a choice at that time,” Mullin told ABC News’ George Stephanapoulos on “Good Morning America” Thursday.

“The mob was going to come through the door, there was a lot of members and staff that were in danger at the time. And when he [drew] his weapon, that’s a decision that’s very hard for anyone to make, and, once you draw your weapon like that, you have to defend yourself with deadly force.”

Mullin said police “showed a lot of restraint” and “did the best they could.”