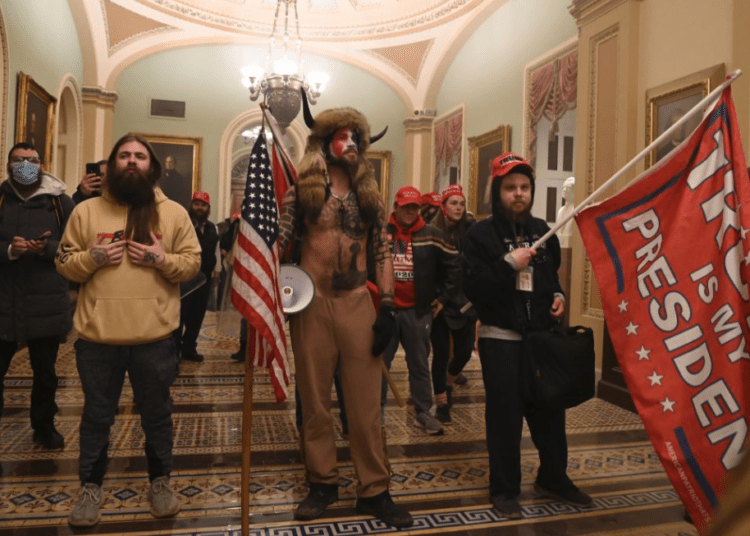 WASHINGTON — The heavily painted man wearing a horned fur hat who made a spectacle of himself on the dais of the U.S. Senate during the storming of the Capitol has been identified as a QAnon supporter and a fixture at various rallies, according to a reports.

Jake Angeli, 32, was seen posing in the chair occupied moments earlier by Vice President Mike Pence at the beginning of the election certification proceedings, which were halted when the riot began, New York Post reported.

The shirtless conspiracy theorist – known as the “Q Shaman” – wore red, white and blue face paint as he brandished a spear from which hung an American flag.

Invaders are confronted by Capitol Police officers outside the Senate Chamber inside the Capitol, Wednesday, Jan. 6, 2021 in Washington. (AP Photo/Manuel Balce Ceneta)

Below is a photo of some of the same characters posted to Twitter. What has gone unreported is the tattoo on the left hand of the man in the tan sweatshirt.

Look closely and you decide. Is it the hammer and sickle tattoo, representing the expansion of communism?

The hammer and sickle is a symbol meant to represent proletarian solidarity – a union between the peasantry and working-class. It was first adapted during the Russian Revolution, the hammer representing the workers and the sickle representing the peasants. It has since been taken up by many communist movements around the world, some with local variations.

In 2020, Angeli told The Arizona Republic that he wears the headgear and paint to attract attention as he talks about QAnon, which claims that a vast network of powerful people are behind a large pedophile ring — including the viral “pizzagate” conspiracy that falsely claimed one such ring ran out of a Washington, DC, pizza shop.

In February 2020, he worked the crowd outside a rally in Phoenix for President Trump, holding up a sign that read, “Q sent me,” the news outlet reported.

“The snowball has been rolling and it’s only getting bigger,” Angeli said at the time. “We’re the mainstream now.”

QAnon advocates are much different than Trump supporters, although many press reports attach their efforts to the president.

Yet QAnon advocates make appearances at other rallies and protests as well. Below Angeli was seen at a BLM protest, according to “Relentless Truth” @lebronsonroids.

Left pic is from a BLM rally.

Angeli told a reporter from the Globe and Mail of Toronto that police had stopped trying to block him and let them into the Capitol, according to The Arizona Republic.

He said police politely asked him to leave, according to the Canadian journalist.

Angeli, who took part in protests of the Arizona election results, also attended rallies to reopen businesses shuttered by the state government to prevent the spread of the coronavirus, the Republic reported.

He said he learned much of what he knows through online research – which included the 1991 book “Behold a Pale Horse” by Arizona writer William Copper – that involved shadowy groups such as the Illuminati, Trilateral Commission and Bilderberg group.

“At a certain point, it all clicked in a way. Oh, my God. I see now the reality of what’s going on,” he said, adding that the Q movement validated beliefs he had held as far back as 2016.