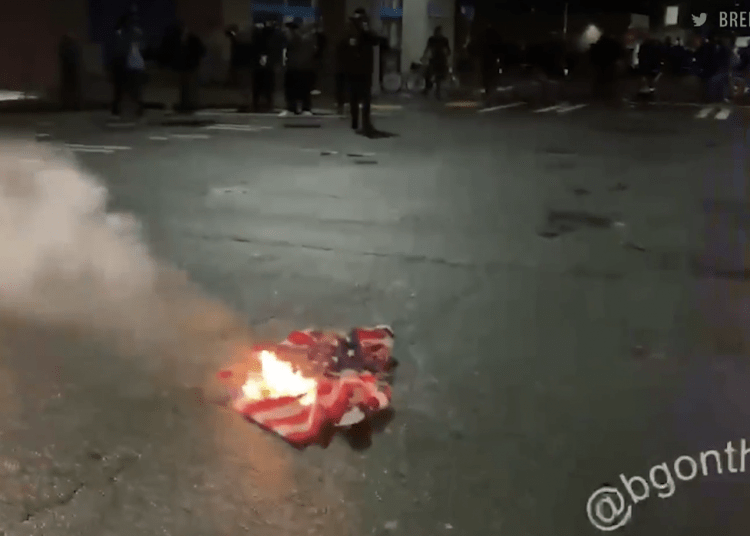 TACOMA, Wash. — Civil unrest broke out on the streets in downtown Tacoma, Washington, overnight Sunday, as agitators began smashing windows and chanting “Free them all!” a day after a police unit was seen breaking free from a mob that swarmed him and began beating on his vehicle.

A Tacoma police SUV pulled into an intersection Saturday night when a mob of individuals swarmed his unit and according to one witness, about ten of them tried to bust the windows, Law Officer reported.

The News Tribune reported a witness telling them that “a lot of people swarmed in that direction (of the police car)….They were intending to block him.”

The officer attempted to back up the vehicle and was able to move a few feet before moving forward and striking several people as he fled to safety.

The 58-year-old police officer was placed on administrative leave, according to a statement released Sunday by the Tacoma Police Department. He has been with the agency for nearly 30 years.

The officer was not identified in the police statement. The case has been turned over to the Pierce County Force Investigation Team.

In videos shared on social media, protestors can be heard chanting, “Free them all!” and blocking roads as they marched near the site where the incident occurred. Others can be seen overturning trashcans and lighting small fires while a few smashed office windows, NBC News reported.

One video shows an American flag burned outside the county’s jailhouse.

An American flag is burned in the street outside the Pierce County probation center #Tacoma #TacomaProtests #Washington pic.twitter.com/yMyVwnYGzh

There have been no reported injuries from the protests, according to police.

“For those who woke up this morning feeling outrage, frustration, grief, heartbreak, or confusion, I understand and honor your feelings. I, too, am deeply saddened by what we saw last night,” Mayor Victoria Woodards said in a statement released on Sunday.

But will individuals in the angry mob beating on the officer’s police unit placing him in peril be held accountable?