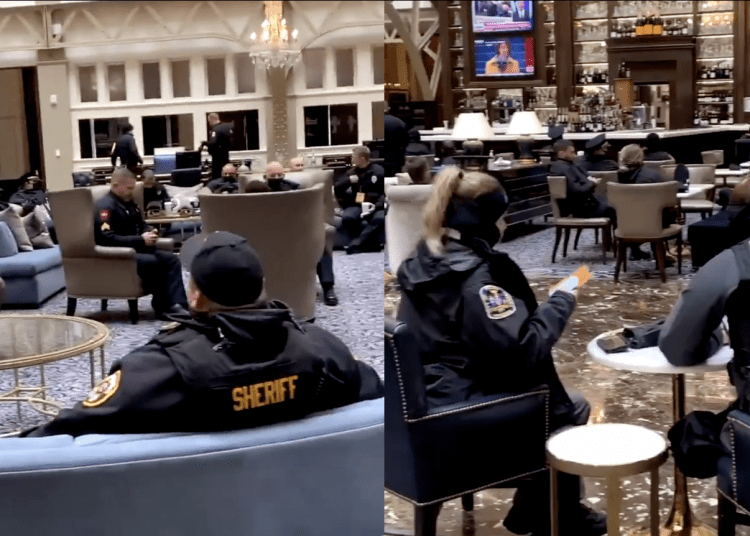 Officers were allowed to rest at the Trump Hotel when National Guard troops were exiled to the parking garage at the Capitol. (Twitter)

WASHINGTON — The same week National Guard troops from around the country were forced to sleep in Washington DC parking garages after providing security at Joe Biden’s inauguration ceremony, Donald Trump opened his hotels to law enforcement officers to rest and recuperate.

A video shows police officers taking a load off in the lobby of Trump Hotel in downtown DC on Wednesday, The Post Millennial reported.

“A heart full of gratitude to all our law enforcement officers…Enjoy America’s Living Room and great having you all with us… @DCPoliceDept,” managing director for the district’s Trump International Hotel, Mickael Damelincourt, tweeted Wednesday.

A heart full of gratitude to all our law enforcement officers…Enjoy America’s Living Room and great having you all with us… @DCPoliceDept pic.twitter.com/HxofXMiEkl

This display of gratitude towards the people that make DC safe came the same week as National Guardsmen were forced to sleep in parking garages after being booted from the Capitol building grounds.

Tens-of-thousands of National Guardsmen were deployed in DC ahead of the inauguration following the Jan. 6 storming of the Capitol building.

“Yesterday dozens of senators and congressmen walked down our lines taking photos, shaking our hands and thanking us for our service. Within 24 hours, they had no further use for us and banished us to the corner of a parking garage. We feel incredibly betrayed,” Politico quoted one Guard member as saying.

However, Politico reported the unit that had been using space in the Dirksen Senate Office building were actually asked to move to the garage by the U.S. Capitol Police.

The Capitol Police put out a statement on the report saying, “The United States Capitol Police immensely appreciates the integral support of the U.S. National Guard in helping to secure the Capitol Complex leading up to, and including the Inaugural ceremony. The Department is grateful for their service and our strong partnership during this time,” Law Officer reported.

GOP Rep. Madison Cawthorn tweeted a video Thursday of him delivering pizza to the displaced National Guard troops inside the parking garages.

“I just visited the solders who have been abandoned & insulted by our leaders,” Rep. Cawthorn tweeted.

“I brought them pizza and told them that they can sleep in my office. No soldier will ever, ever sleep on a garage floor in the US Capitol while I work in Congress. Our Troops deserve better,” he continued.