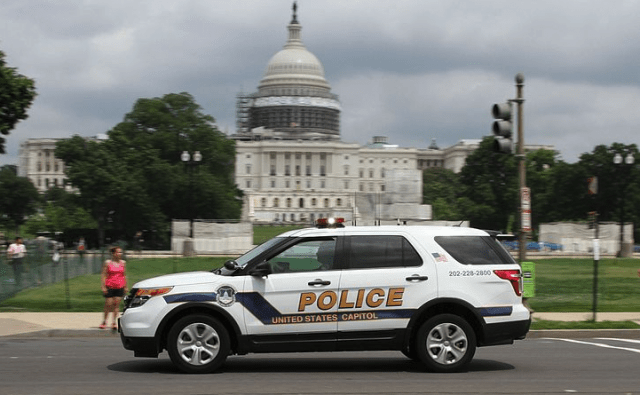 WASHINGTON — The union representing U.S. Capitol Police officers issued a stinging rebuke of department leadership Wednesday, arguing the organization’s top brass failed to relay key information to officers in advance of the Jan. 6 riot that left personnel with severe brain injuries, and one who is going to lose an eye, according to reports.

Capitol Police Labor Committee Chairman Gus Papathanasiou responded in a statement to what he described as a “startling admission” made by Chief Yogananda D. Pittman before the House Appropriations Committee that “angered and shocked the rank-and-file officers,” Fox News reported.

During her testimony Tuesday, Pittman said that intelligence available as early as Jan. 4 indicated that the event in Washington, D.C., on Jan. 6 “would not be like any of the previous protests held in 2020,” admitting that the department was aware “militia and white supremacist organizations would be attending,” some of these participants “were intending to bring firearms and other weapons” to the event, and “there was a strong potential for violence and that Congress was the target.”

“The entire executive team failed us and they must be held accountable. Their inaction cost lives.”

“The fact they did not relay this information to the officers on duty prior to the insurrection is inexcusable,” Papathanasiou said. “The officers are angry and I don’t blame them. The entire executive team failed us and they must be held accountable. Their inaction cost lives.”

“This was not a ‘whole department’ failure, but a leadership failure,” he said.

Nearly 140 officers — between both U.S. Capitol Police and the D.C. Metropolitan Police Department (MPD) — were injured during the incident on Jan. 6.

Papathanasiou said officers who “were not issued helmets prior to the attack” have sustained brain injuries. One officer has “two cracked ribs and two smashed spinal discs,” and one officer is “going to lose his eye, and another was stabbed with a metal fence stake,” he said.

“We have one officer who lost his life as a direct result of the insurrection. Another officer has tragically taken his own life,” he added, referencing both Capitol Police Officer Brian Sicknick, who died at the hospital from injuries sustained while “physically engaging” with rioters, and another Capitol Police officer, Howard Liebengood, who died by suicide days after responding to the incident on Jan. 6.

A second officer suicide was announced Tuesday — Jeffery Smith, with the D.C. Metropolitan Police Department, who also took his own life in the days after responding to the riot, Law Officer reported.

Calling out the chiefs

Speaking to Fox News about the injuries, Papathanasiou said he blames the chiefs of police “who took ‎away our riot helmets and gas masks weeks and months ago.” He said he believes it was an MPD officer who suffered the eye injury, and “would also add, the union addressed the issue on the helmets in writing, as well as in formal meetings, and the Chiefs flat out ignored us.”

“Our union has long advocated for more training, more staff and better equipment, only to be repeatedly ignored by our leadership. Yet, Acting Chief Pittman now blames these glaring inadequacies for contributing to the failure to protect the Capitol on January 6th.”

In his lengthy statement responding to Pittman’s testimony, Papathanasiou said the disclosure that the entire executive team — made up of Pittman, former Chief Steven Sund and Assistant Chief Chad B. Thomas — “knew what was coming but did not better prepare us for potential violence, including the possible use of firearms against us, is unconscionable.”

“Our union has long advocated for more training, more staff and better equipment, only to be repeatedly ignored by our leadership,” he said. “Yet, Acting Chief Pittman now blames these glaring inadequacies for contributing to the failure to protect the Capitol on January 6th.”

NEW: SCATHING STATEMENT from Capitol Police union on failed leadership in department before and during Jan. 6 attack on the Capitol: pic.twitter.com/YbXM4fvPzc

Effective leaders exist within the department

The union head called on Congress to recognize that leaders already exist within the department — “some of whom battled side by side with officers during the insurrection” — who are capable of implementing needed changes, but “those leaders do not exist at the Chief of Assistant Chief level, possibly the Deputy Chief level,” he said.

The next chief should not be recruited from outside the department, he argued, because he or she needs to be “shovel ready on the day,” have the confidence of officers and because “there is no time for on-the-job training given the ongoing threats we are facing.”

“Our officers need leadership they can trust,” Papathanasiou said.