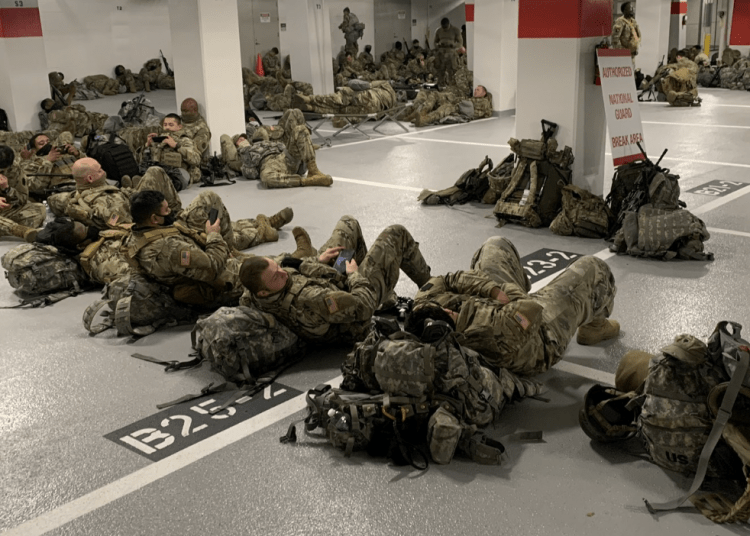 The National Guard was banished to the parking garage at the U.S. Capitol. (Twitter)

WASHINGTON — Thousands of National Guardsmen were banished outdoors or to nearby parking garages after two weeks pulling security duty following the riots of Jan 6. “We feel incredibly betrayed” was the common sentiment before they were allowed back into the Capitol Thursday night, Politico reported.

Reports of shabby treatment of National Guard troops at the U.S. Capitol were sparking bipartisan outrage among lawmakers and other officials Thursday — with Texas Gov. Greg Abbott calling for the return home of his state’s Guard members.

Thousands of National Guard troops from several states had deployed to the U.S. Capitol to protect Wednesday’s inauguration of President Biden against threats of violence following the Jan. 6 riot.

Photos of Guard members sleeping on the marble floors of the Capitol quickly went viral — until they later received cots. Then on Thursday came another insult: According to reports, the Guard members were abruptly told to take their break time inside a parking garage instead of inside the Capitol.

The Guardsmen, who had been resting inside the Capitol between 12-hour shifts, were moved to a nearby parking garage where photos obtained by Politico and other outlets showed members crowded together on the ground — some resting their heads against cement pillars.

By Thursday evening, Abbott was among those who had apparently seen enough, Fox News reported.

I have instructed General Norris to order the return of the Texas National Guard to our state. @TexasGuard

Abbott previously objected to reports that Guard members were being “vetted” over concerns about a possible “inside” attack during the Biden inauguration.

This is the most offensive thing I've ever heard.

No one should ever question the loyalty or professionalism of the Texas National Guard. @TexasGuard

I'll never do it again if they are disrespected like this.https://t.co/STZDMz7PGm

More outrage came earlier Thursday from other lawmakers and officials, both Republicans and Democrats.

Hundreds of Guard soldiers relegated to the Senate garage, breathing in exhaust fumes and covid. Story coming in a bit pic.twitter.com/8OW4frePOh

Senate Majority Leader Chuck Schumer, D-N.Y., tweeted about the parking garage reports, “If this is true, it’s outrageous. I will get to the bottom of this.”

If this is true, it's outrageous.

Rep. Madison Cawthorn, R-N.C., visited the troops and tweeted that he brought them pizza. “No soldier will ever, ever sleep on a garage floor in the US Capitol while I work in Congress.”

I just visited the solders who have been abandoned & insulted by our leaders. I brought them pizza and told them that they can sleep in my office.

No soldier will ever, ever sleep on a garage floor in the US Capitol while I work in Congress

U.S. Rep. Elise Stefanik, R-N.Y., tweeted, “This is absolutely unacceptable and despicable treatment of our brave and dedicated National Guard who answered the call to serve. We need to demand answers now and this needs to be fixed immediately.”

This is absolutely unacceptable and despicable treatment of our brave and dedicated National Guard who answered the call to serve.

We need to demand answers now and this needs to be fixed immediately. https://t.co/FyNUpFYJyX

CBS reporter Kris Van Cleave reported early Friday the National Guard said the troops are out of the garage and will take their breaks in Emancipation Hall at the Capitol Visitors Center from now on. He included a video of the troops leaving the garage.

The National Guard confirms to ⁦@CBSNews the troops are out of the garage and back into the Capitol building and the troops will take their breaks near Emancipation Hall going forward. Video from the Guard: pic.twitter.com/SpkU5oszsY

Sen. Tammy Duckworth, D-Ill., confirmed that she had made several calls and had been informed the “Capitol Police have apologized to the Guardsmen and they will be allowed back into the complex tonight. I’ll keep checking to make sure they are.”

One Guardsman told Politico that on the day of the inauguration dozens of lawmakers had taken photos with them, shook their hands and thanked them for their service. He added, “Within 24 hours, they had no further use for us and banished us to the corner of a parking garage. We feel incredibly betrayed.”

Politico reported the unit that had been using space in the Dirksen Senate Office building were asked to move to the garage by the Capitol Police.

“After significant outcry, it seems like there is movement right now to get Guard members back inside the Capitol, into the visitors center,” Politico reporter Natasha Bertrand, tweeted.

As we first reported, Capitol Police were the ones who asked guard members to move out of the Capitol today. After significant outcry, it seems like there is movement right now to get Guard members back inside the Capitol, into the visitors center https://t.co/pc5EeLSOQJ https://t.co/eKS2B8vZm3

Politico reporter Lara Seligman said a Guard source told her “all units at the Thurgood Marshall parking garage are ordered to relocate to the CVC (Capitol Visitors Center) immediately.”

Just got confirmation from Guard source that all units at the Thurgood Marshall parking garage are ordered to relocate to the CVC immediately.

The U.S. Capitol Police put out a statement on the report saying, “The United States Capitol Police immensely appreciates the integral support of the U.S. National Guard in helping to secure the Capitol Complex leading up to, and including the Inaugural ceremony. The Department is grateful for their service and our strong partnership during this time.”

So @JoeBiden & @SpeakerPelosi used them on Inauguration Day like props & then kicked them to the curb once the cameras left?

It continued, “The Department’s request for National Guard assistance included a specific number of personnel to allow the National Guard to provide, at a minimum, 12 hours of off-campus rest time for the troops, and understood that this would be carried out throughout their deployment. Recently, the Department requested that the troops’ schedules be changed so they work no more than 8-hour shifts to allow for more off-campus rest time post-Inauguration.”

The Guardsmen have been using the garage only for breaks between their long shifts and have hotel rooms to sleep in at night, Van Cleave tweeted.

A spokesman for the National Guard told Politico, “As Congress is in session and increased foot traffic and business is being conducted, Capitol Police asked the troops to move their rest area. They were temporarily relocated to the Thurgood Marshall Judicial Center garage with heat and restroom facilities. We remain an agile and flexible force to provide for the safety and security of the Capitol and its surrounding areas. The Guard is reviewing the request so that logistics and schedules can be adjusted.”