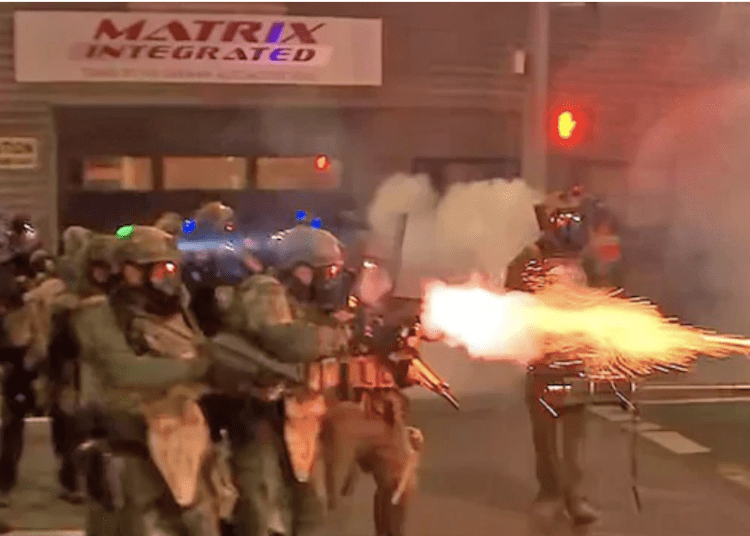 PORTLAND, Ore. — The Portland Police Bureau declared an unlawful assembly Wednesday night after about 150 rioters caused damage to a federal immigration facility in the city, according to the authorities.

The unrest near the Immigration and Customs Enforcement building was declared after rioters started throwing rocks and eggs, and vandalizing the building, located in the city’s south waterfront neighborhood, Portland police Sgt. Kevin Allen said in a 10 p.m. update.

“We have observed property damage to the building,” the Portland Police Bureau wrote on Twitter. “Anyone who is involved in criminal behavior including: vandalism and graffitting is subject to arrest or citation.”

To those gathered near the ICE facility: We have observed property damage to the building. Anyone who is involved in criminal behavior including: vandalism and graffitting is subject to arrest or citation.

“This gathering may impact traffic and access into the neighborhood,” Allen said on Twitter. “We’ll continue to closely monitor this event.”

As of early Thursday, police said they were standing by “to address crimes” in the surrounding neighborhood, and some arrests were made, although they failed to elaborate any further.

Authorities said earlier gatherings in Portland — which saw Antifa protesters clash with authorities as they gathered to voice dissatisfaction with President Biden, forcing officers to retreat and taking at least one police bicycle — had ended.

The Portland Police Bureau said several events were planned in the city just hours after Biden was sworn into office. About 150 people gathered at Revolution Hall around 2 p.m. and marched to the headquarters of the Democratic Party of Oregon, Allen said.

The so-called J20 protest was a demonstration against Biden and law enforcement.

Some in the group smashed windows and vandalized the building with graffiti.

Portland: Watch shocking footage of #antifa smashing up the Democratic Party of Oregon headquarters. They bring weapons while their comrades use umbrellas to block surveillance video. Video by @Julio_Rosas11. #PortlandRiots pic.twitter.com/KdNNRgIEV0

When the group left the area and marched to a nearby park, police officers made “targeted arrests” in connection to the damage at the local Democratic Party headquarters. The group later dispersed, Fox reported.

In total, eight adults were arrested for crimes ranging from rioting and possession of a destructive device to reckless burning. The suspects’ ages ranged from 18 to 38.

At one point when officers on bicycles entered the crowd to tell someone to remove metal poles affixed to a banner that could be used as a weapon, they were swarmed and pelted with objects, Allen said.

Portland: Police make a few arrests of #antifa after they destroyed the Democratic Party of Oregon headquarters. #PortlandRiots pic.twitter.com/3SdbHx4mAP

A video posted online shows a crowd of protesters trying to take one officer’s bicycle. Within a few minutes, authorities said they recovered the bike and tried to leave the area, but were blocked by members of the crowd.

“As officers disengaged, the crowd showed aggression by swarming officers and throwing objects,” Allen said. Authorities said officers had to push people away “with their hands” so they could leave.

Long poles and a large knife were recovered from people in the crowd, police said in a news release.

Portland: #Antifa try to steal an officer’s bicycle after he confiscated a knife from one of them. #PortlandRiots pic.twitter.com/GszVPPJoMr

People in the crowd started blocking or stopping officers as they attempted to leave, police said. Officers deployed a smoke canister in an effort to safely leave the area, Allen said. Authorities warned the group they did not have a permit to march or remain on the sidewalk.

“Everyone at Revolution Hall is reminded to obey all laws. Roadways in the area remain open to vehicular traffic and no permit for use of area roadways have been approved. Pedestrians and demonstrators must obey all traffic laws and utilize sidewalks. Failure to obey this direction may result in citation or arrest,” police announced over a loudspeaker.

The crowd eventually moved west, with some people blocking a freeway on-ramp, police said. Dumpster fires were also lit in the area.

Portland: A police officer was surrounded by a mob of #antifa as he tried to confiscate their weapons. #PortlandRiots https://t.co/JpqaLx17Pt

Other video clips show people holding banners that read: “We are ungovernable” and “We don’t want Biden – We want revenge!” for “Police Murders,” “Imperialist Wars” and “Fascist Massacres.” Marchers called for an end to the sweeping of homeless encampments and advocated for other social justice causes.