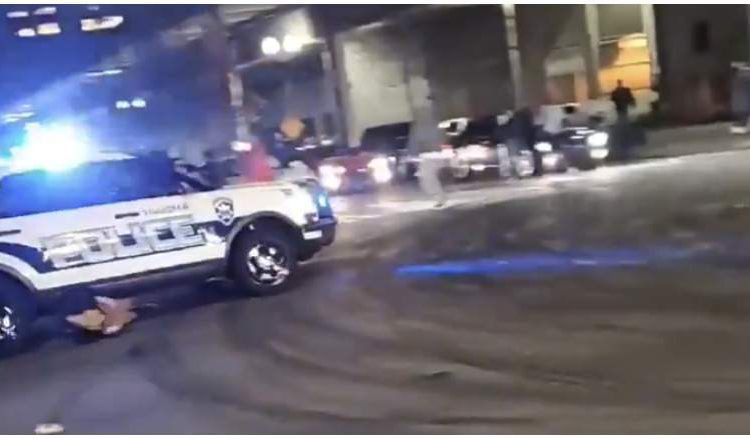 In what can only be described as real life Grand Theft Auto, dozens of people gathered in downtown Tacoma Saturday night during an impromptu “street race” that included cars spinning circles and pedestrians in the streets cheering them on.

The incident occurred just before 7 p.m. on South 9th Street between the intersections of Court A and Pacific Avenue, in Tacoma.

Traffic was halted as pedestrians filled the streets that looked like much of the violence and destruction that has happened in the area since President Biden was sworn into office last week.

A Tacoma police car pulled into an intersection when a mob of individuals swarmed his car and according to one witness, about ten of them tried to bust the windows.

The News Tribune reported a witness telling them that “a lot of people swarmed in that direction (of the police car)….They were intending to block him.”

The officer attempted to back up the vehicle and was able to a few feet before moving forward and striking several people and then leaving the scene.

Social media brought it’s usual outrage but in typical fashion, just a portion of the bystander video was shown (below):

The police are thinking they are above the law in a lot of states, pure Trumpism. Very, very similar to Nazi Germany. I'm afraid we have a long way to go before we get back to the America we had before Trump and the Republicans broke the country.

In the full video below, you can hear what appears to be the officer sounding a horn or siren to disperse the crowd, which only makes the crowd more aggressive.

We’ve said it before and we will say it again. If cops are so bad then why do heavy edits of video and lies have to continue?

One person was reportedly ran over by the officer and the Tacoma Police Department has responded to the controversy.

“People hit the body of the police vehicle and its windows as the officer was stopped in the street. The officer, fearing for his safety, tried to back up, but was unable to do so because of the crowd.”

The officer then moved the car forward, with lights and sirens, striking at least one person. The condition of the individual, who was taken to a local hospital, is unknown.

Police said the officer stopped after moving some distance away and called for medical aid.

As some online called the officer a “murderer” who ran over some individuals at a “car meet,” the collection of videos paint a much different story.

Tacoma Police Chief Mike Ake said that the incident will be investigated as “deadly force” as it should be but there is no reason to believe that alone makes the action by this officer wrong.

But that truth doesn’t seem to matter much at all these days.

A deranged police officer drove through a crowd and tried to murder people in Tacoma.

That's not "protect and serve."

That "cop" needs to be arrested and charged with attempted murder.

The truth is that in today’s climate, a mob of individuals running up and blocking your car and attempting to bust out windows should make you extremely concerned for your safety.

And that is whether you are a Tacoma police officer or a private citizen driving to the grocery store.

Reginald Denny suffered a fractured skull, impairment of his speech and ability to walk during the 1992 Los Angeles riots for the crime of being in his truck at the wrong place. But hey, why let common sense get in the way of calling cops murderers?

The United States Military has been training in counter-ambush vehicle tactics for decades because in a foreign land, that is a real threat.

While extensive, you pretty much saw that training play out in Tacoma last night. “get off the x” and “drive through the threat” are just some of the standard talking points in those courses.

While there has been a lot of talk in the United States about taking “warrior” tactics out of law enforcement, before you make those demands, you may want to ensure your streets look like Mayberry and not Caracas.

Whether the internet trolls and the cowardly politicians want to admit it or not, law enforcement gets to do everything they can to protect themselves and unlike the keyboard warriors, they don’t get the luxury of watching hours of videos and all of the narratives by those not present before making that decision.

Those are absolute facts you will never hear but you can read about them in the United States Supreme Court Case, Graham v. Connor (1989). That happens to be the “law” when it comes to when law enforcement can use deadly force and you know what isn’t mentioned in that case that will remain for generations?

That’s right. It does not specify what weapon the police can use and it doesn’t require the suspect(s) to have any particular weapon. We know that the cop haters will never read it but this pretty much sums it up:

The Fourth Amendment “reasonableness” inquiry is whether the officers’ actions are “objectively reasonable” in light of the facts and circumstances confronting them, without regard to their underlying intent or motivation. The “reasonableness” of a particular use of force must be judged from the perspective of a reasonable officer on the scene, and its calculus must embody an allowance for the fact that police officers are often forced to make split-second decisions about the amount of force necessary in a particular situation.

So if in the next few days, as all the demands of “police reform” start making the rounds, let them know to reform all they want, but when it comes to law enforcement, just like everyone else in America, we subscribe to the United States Supreme Court.