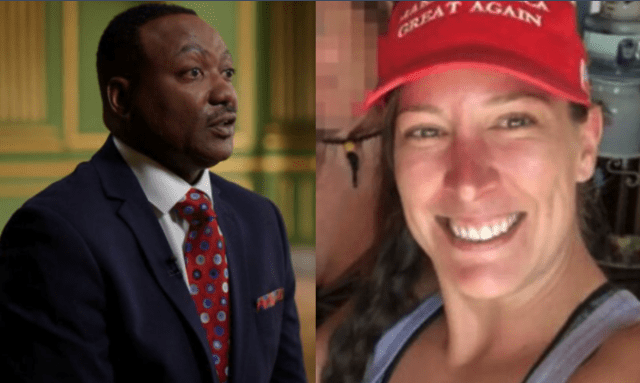 Judicial Watch obtained more than 500 pages of internal documents from the DC Metropolitan Police Department regarding the killing of Ashli Babbitt once they filed a Freedom of Information Act lawsuit in May.

After obtaining the reports, Judicial Watch believes the shooting of Ashli Babbitt, who was breaching the Capitol during the riot on January 6, was unjustified, Daily Wire reported.

Eyewitness testimony from a Capitol Police sergeant, whose name was redacted, suggests that while Babbitt did in fact climb through a broken window to enter the Capitol building, she was unarmed when she was fatally shot by Capitol Police Lieutenant Michael Byrd, according to the report.

“Sergeant [redacted] observed a white, female protester was climbing through an opened area where the glass pane had been knocked out,” a document from the Internal Affairs Division states.

“He heard a gunshot and this female fell backwards through the opening. The crowd on the other side of the barricaded east doors, began to step back and some put their hands in the air. Sergeant [redacted] observed Lieutenant Byrd step back just after hearing the gunshot. He did not see anything in the female protester’s hands prior to the gunshot.”

“Sergeant [redacted] never went on the other side of the barricaded east door. He also did not know that it was Lieutenant Byrd who shot his gun until he talked to him moments after it occurred. Lieutenant Byrd looked upset and stated, ‘I was the one who took the shot,’” the report revealed.

“These previously secret records show there was no good reason to shoot and kill Ashli Babbitt,” Fitton said after obtaining the documents through a May 2021 FOIA lawsuit. “The Biden-Garland Justice Department and the Pelosi Congress have much to answer for the over the mishandling and cover-up of this scandalous killing of an American citizen by the U.S. Capitol Police.”

Judicial Watch noted that in a written transcript of the interview with the sergeant, he detailed he was not sure “if something happened to” Byrd that “caused him to take the shot or not,” Fox News reported.

“Uh, I saw Lieutenant Byrd kinda. I don’t know if it was before or after. Cause I was trying to figure this out of, but there was at one point where I remember seeing him and he kind of went like this and then came back up again. Uh, I don’t know if that was from him taking the shot and then stepping back from that shot or if it was before that, I can’t, no matter how I tried to rack my brain, I can’t, I can’t figure out when that happened, but uh, so I don’t know if something happened to him where [sic] caused him to take the shot or not,” the written transcript states.

The interviewer asked the sergeant if Jan. 6 was a “frightening experience.”

The sergeant replied, “Oh yeah. I’m not afraid to say I was, I was scared s–t.”

Read more coverage on this story from Fox News here.