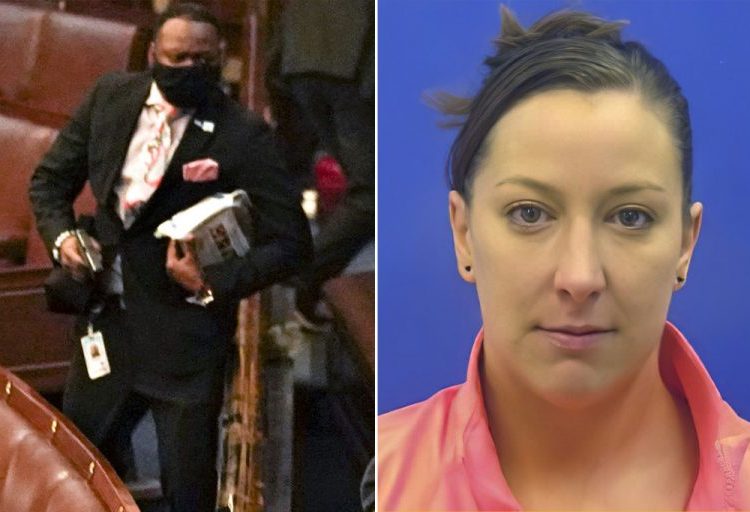 I had no reason to question the police shooting of Ashli Babbitt on January 6th and I have always taken the stance that unlike so many others, we should always wait for actual details and an investigation before passing judgement. Granted, there were some obvious red flags that continued to emerge up to today and the actions after the shooting by the United States Capitol Police were some of the most alarming.

Not only did the agency not provide any details following the shooting, but to this day they have never provided their use of force policy or pertinent training materials. The identity of the officer was shielded until today, when Lt. Michael Byrd gave an interview with NBC News. Seemingly, the media made no effort to look for any details and they knew who the officer was for months but unlike every other police shooting, they kept quiet.

The use of force policy along with training is important for one huge reason. From video of the incident, an unarmed woman was shot for committing misdemeanor crimes. We know that because the vast majority of the charges were for trespassing on Capitol grounds and it is apparent in the video that at the time of her death, Babbitt was trespassing and likely committing vandalism and disorderly conduct. When shot, there were other law enforcement officers around her and there were many others in her vicinity.

And if you were hoping to get those questions answered after Lt. Byrd spoke tonight, you would be disappointed. What has been a series of weird actions by many, including the media and politicians that all of sudden seemed to endorse the killing of unarmed suspects committing a misdemeanor along with the Capitol Police eluding for months by their silence that Officer Brian Sicknick was murdered during an insurrection and that being exposed as a lie, has now all but turned into one of the biggest scandals we have seen that no one will dare talk about.

Questionable Use of Force

Lt. Michael Byrd had been with the United States Capitol Police for 28 years and on January 6th, he found himself with 60-80 House members inside their chamber while a crowd gathered outside glass doors that led to the lobby.  Byrd focused on the glass doors saying, “I hoped and prayed no one tried to enter through those doors. But their failure to comply required me to take the appropriate action to save the lives of members of Congress and myself and my fellow officers.”

Byrd said that he did not see a weapon and that he gave commands for the crowd to get back when Babbitt “tried to climb through one of the doors.” He fired one shot, striking Babbitt, 35, in the shoulder and she later died.

Byrd said that he made the right decision and that he saved “countless” lives.

“I know members of Congress, as well as my fellow officers and staff, were in jeopardy and in serious danger. And that’s my job.”

Byrd said that he only used deadly force as a “last resort.”

Now we understand why all of this has and will continue to be a mystery.

If you believe I am being unfair, let me suggest that you take the same exact circumstances and apply them anywhere else. That narrative would look something like this:

An officer of one race, shoots and kills a suspect of another race that was committing a misdemeanor crime. The suspect was unarmed and no other less lethal means including an attempt of an arrest, Taser, etc. was even used and despite this, the officer claims it had to be done as “a last resort.” Following the shooting, the agency did not release any information including the policy or training or information on the officer. The agency investigated it, without releasing a report, and cleared the officer of all wrong doing and the officer is hailed a hero for saving lives.

Sounds bad doesn’t it and while I know that this has been politicized and we will get the proverbial “insurrection” and “traitor” comments, the facts matter. Those facts say that not one person has been charged with insurrection; not one person was charged with having a gun and the vast majority of those charged were for crimes ranging from trespassing to disorderly conduct.

We believe that anyone committing a crime that day should be held accountable but was the death of Ashli Babbitt justified?

We are being told it was but from what we know today, it clearly was not.

From what we know today, this incident borders insanity and there are many more questions that need to be answered.

I expect none of them to be answered and the next time you see Lebron James or a politician railing against an actual justified shooting of a felon with a weapon that is attacking a police officer, remember January 6th and the scam that much of it has been.

In closing, I have a warning for every cop in America:

If you are a police officer working for anyone but Congress, do not expect the treatment that Lt. Byrd got.

Your identity will not be hidden and the media will not treat you like a hero…especially if you shoot and kill an unarmed woman that is a different color than you for committing a misdemeanor crime.