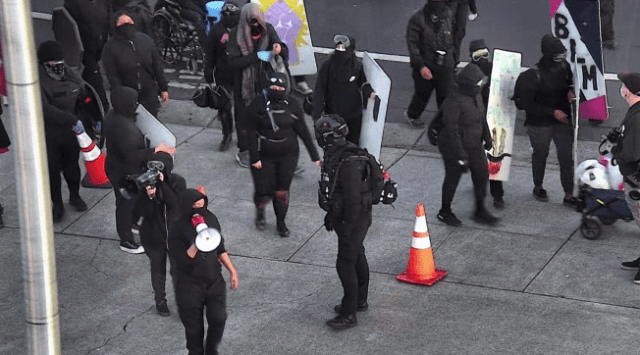 Video cameras outside of the station captured black-clad demonstrators holding “f**k the police,” “Black Lives Matter,” and “ACAB” signs as they approached the doors.

The criminals broke a glass door at the station and spray-painted graffiti including “profane and threatening” messages about the police, according to a post on the department’s Facebook page.

The page also noted that there had been reports of individuals breaking out the windows of occupied vehicles. There were no reported injuries, according to Fox News.

“Later at Andrews Park, police found an abandoned cart with two machetes in it. A vehicle associated with the protestors, and with helmets found inside, was impounded,” an additional post on the Facebook page noted.

The group also smashed windows at the nearby City Hall. Chief John Carli said the damage amounted to about $30,000, KTXL reported.

There have been no arrests in the series of crimes as investigators begin the process of reviewing video footage.

Carli told reporters that the department is asking for the community’s assistance in finding those responsible.

“Vacaville respects peaceful protests but what happened Sunday night was unacceptable,” he wrote in a statement. “This does not reflect who we are as a community.”

A crowd of protestors vandalized the Vacaville Police Department and other parts of City Hall around 5:30 Sunday night,…

“This is the time I felt that we need to give a different image of gatherings, this isn’t a protest, this isn’t a rally but it’s a celebration of love to honor Dr. Martin Luther King,” Gutierrez said. “Violence, none of that should ever be accepted, never be tolerated. The images we saw of the destruction last night were horrible and I just hope that this is giving the community that different image of positivity and peace and love.”

“Today’s display of courage and love was such an amazing counter to the lawlessness, violence and hate we have seen in our country, our state and sadly, Vacaville,” he wrote in his own post. “Violence, hatred and chaos cannot be accepted. The assault on our downtown, police department and city hall last night cannot be tolerated, the violent attack on protestors two weeks ago cannot be tolerated. The events we all witnessed last week at our nation’s capital cannot be tolerated.”

“We collectively need to turn down the heat and let some of the steam out of the pot. The community and the nation is at a boiling point and we all have a part in condemning violence, any violence and encouraging dialogue and hard conversation,” he said. “We are better than this, we are more alike than we are different and again, Vacaville we have to do better.”

Vacaville police’s Lt. Chris Polen told Fox News the perpetrators were wearing masks, goggles, helmets, and carrying what looked to be sticks as they marched through the city — a marked change from weeks past. He added that the department was getting “mixed messages” as to who might have been involved.

“Over the past several months, we’ve been seeing a slight change in behavior…It was kind of more of — just argumentative with police [and] not wanting to follow instructions…but we didn’t see a lot of vandalism,” he said. “Hardly at all, actually. So, we didn’t see vandalism occurring whether it was spray paint or broken windows. We didn’t see any of that for a period of six months. But, this changed everything for us.”

However, while the department has begun a criminal investigation, its focus is also on managing and mitigating potential future risks like Wednesday’s inauguration.

“There’s additional information that there might be protests tomorrow in Vacaville,” Polen noted. “So, we’ve put up temporary fencing around the city hall campus and the police department. We’re ramping up additional staffing to prepare for any violent protests.”

“Obviously, peaceful protests are fine. We don’t have a problem with that and we will support those measures and give you the freedom to do so. But, when it turns violent, we have a different course of action that we plan to make any and all arrests to prevent violence from occurring in our city,” he said.

Polen told Fox News he had seen a “significant change” in how people viewed policing and the department, noting that his colleagues have been working tirelessly to “try to give people the freedoms that they desire, [and] give them the peace that they want.”

“So, our staff is tired. They’re trying to endure the demands of society — that’s being placed on them,” he said. “But, I will say that because we have a group of professionals that work in our organization, this law enforcement agency is something to be extremely proud of.”