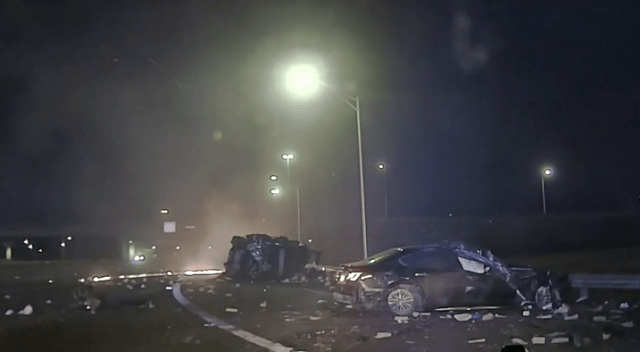 CAMDEN COUNTY, Ga. – A deputy of the Camden County Sheriff’s Office was injured in a fiery crash after a high-speed chase that lasted nearly 30 minutes and spanned more than 40 miles in the early morning hours of January 6. The man leading law enforcement authorities in the dangerous pursuit was reported as a high-risk missing person out of New Jersey who was possibly suicidal.

The officer attempted a traffic stop, but the driver, identified as Olorsor Larose, 35, did not yield. Moreover, the suspect proceeded to turn off his headlights and increase his speed, reaching 150 mph, according to authorities. Stop sticks were deployed on I-95 in Glynn County, but the vehicle continued at speeds exceeding 100 mph.

Dash camera videos showed the driver led deputies on a dangerous chase and weaved through dozens of vehicles during the pursuit.

JUST IN: Here is the dash camera footage from the high-speed chase at the beginning of January that ended in serious injuries for an officer. He is still recovering. @wjxt4 READ MORE: https://t.co/mOmyosXDLv pic.twitter.com/7dBK5dqoOG

The impact from either the deputy’s vehicle or the suspect’s vehicle also hit an unoccupied broken down vehicle that was parked on the side of the interstate. Upon impact, the abandoned vehicle burst into flames.

When officers approached the crash, they said Larose was seen trying to light a cigarette. He was arrested, taken to the hospital, and then booked into the Camden County Jail. He was reportedly uninjured in the horrific collision, according to GSP and jail records.

However, Deputy Thigpen was taken to a local hospital in Jacksonville in serious condition. He suffered a fractured knee, torn tendons in his right elbow, and other non-life-threatening injuries, but underwent extensive treatment in the hospital.

A GoFundMe to help the deputy and his family says he will have surgery to reattach ligaments in his arm. Thigpen’s wife has taken leave from work to travel back and forth from Georgia to Jacksonville.

GSP said Larose was a person who had been reported missing out of New Jersey. A note in the missing person’s report said he may be endangered, mentally unstable and at risk of committing suicide, News4Jax reported.

The chase and subsequent collision elicited a massive response from first responders and kept the roadway closed for about seven hours.

In Camden County, Larose is charged with two felonies, including being a fugitive from justice and aggravated assault, and three misdemeanors including speeding, reckless driving, and fleeing police.