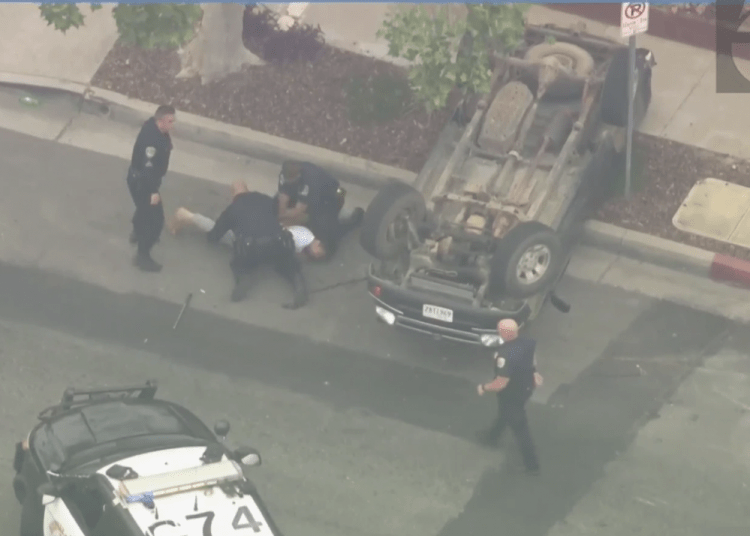 LOS ANGELES — A driver leading California Highway Patrol officers on a chase along the 110 Freeway and surface streets in the Los Angeles area Thursday morning was taken into custody after a successful PIT maneuver caused his truck to flip over. (Watch video below.)

The driver was traveling on the 110 Freeway before he got off the highway and was leading authorities on surface streets. At one point he was seen waving at Sky5 (news helicopter), which was overhead, KTLA reported.

At one point, while driving slowly, he forced other drivers in opposing lanes to move out of his way. The driver again could be seen blowing through a red light near Venice Boulevard, aerial footage showed.

At 9:42 a.m., the suspect went into a parking structure at San Vicente and Venice boulevards, but soon returned to surface streets.

Soon after, a CHP unit was able to hit the back of the truck in an attempt at a PIT maneuver, and was successful on a second try. CHP officers then got out of their vehicles and drew their weapons at the driver of the truck. However, the suspect was not deterred and continued in his effort to evade police.

Shortly after, the man who was putting other motorists in danger, made a U-turn and again headed west on San Vicente, aerial video showed.

About 9:45 a.m. the CHP unit again tried a PIT maneuver and the truck stopped for a short period, but the driver eventually continued west. The unit then hit the back of the truck once again, this time causing the vehicle to flip over at San Vicente and South Redondo boulevards, in the Mid-Wilshire area, according to KTLA.

A CHP officer broke the driver’s side window and was able to pull him out of the truck by his leg and take him into custody after a brief struggle.

The CHP has released no further details at the time of publication.