The aggressive agitators interrupted the solemn occasion with their antics 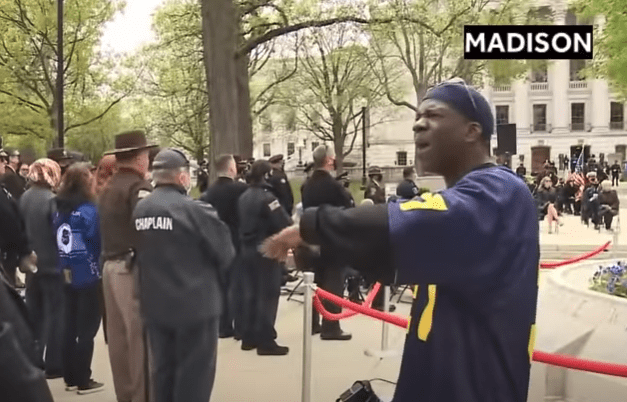 MADISON, Wis. — Wisconsin law enforcement officers formed a procession Friday on Capitol Square to honor those who have been killed in the line of duty. It should have been a solemn day, but aggressive BLM protesters sought to spread angst and intimidation as they argued their right to disrupt the peace at the event through their behavior.

For most of 2020 and 2021, law enforcement officers who died in the line of duty couldn’t be properly remembered in the Wisconsin Law Enforcement Memorial in Capitol Square, a memorial that pays tribute to those who have given their lives upholding the law throughout the years, due to the COVID-19 pandemic. However, six names were added to the honor roll last week, WEAU-TV reported.

Law enforcement officers and their families gathered in the square for what was to be a solemn event to remember the legacy of six officers who gave their lives between 1933 and 2020. Their names were added to the memorial, which already lists 285 heroes who gave the ultimate sacrifice. A tapestry of peace officers formed a procession to attend the event.

However, eight minutes into the ceremony, disruptive protesters proved obnoxious as they used vile commentary to make absurd accusations of the law enforcement personnel in attendance, the Western Journal reported.

“We have a right to protest!” one individual can be heard saying.

“Black Lives Matter!” another can be heard saying at the two-minute mark.

After a bit of back-and-forth, he goes on a rant against an unidentified individual: “You’ve got tears coming out of my eyes. You know why? Because I have faith in people, and you’re totally disrupting my f***ing balance right now.” He went on to say he was “begging you m*********ers to stop killing people that look like me.”

Meanwhile, rap music with lyrics like “f*** the police” was playing in the background during a moment of silence, according to the Western Journal.

“How come the African-American national anthem wasn’t played?” another asked.

The ceremony, which lasted nearly 40 minutes, was filled with disrespect as agitators continually shouted, “We have a right to protest!”

The officers included on the 2020 Honor Roll are:

The officers included on the 2021 Honor Roll are: