One of the plaintiffs in the case, Nekima Levy Armstrong, is a prominent Black Lives Matter activist who has helped organize protests in front of people's homes. 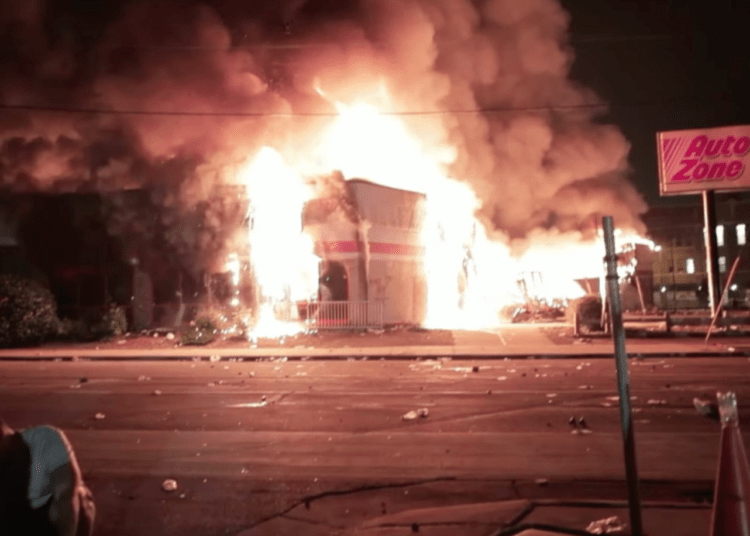 An Auto Zone was completely engulfed in flames during the riots, one of thousands of businesses destroyed in the mayhem. (Alpha News)

MINNEAPOLIS – The city of Minneapolis has agreed to a settlement involving a dozen people who were allegedly injured during the protests and riots after the death of George Floyd in 2020.

In a Wednesday press release, the Minnesota chapter of the American Civil Liberties Union (ACLU) announced that Minneapolis will pay $600,000 to be split among the 12 plaintiffs, meaning they each will get $50,000. ACLU was one of three firms who banded together in a class action lawsuit on behalf of the demonstrators. The case stems from two separate lawsuits that were consolidated.

The lawsuits had argued Minneapolis police suppressed the First Amendment rights of protesters by using “unnecessary and excessive force,” such as tear gas and rubber bullets, and failing to issue commands to disperse before using force.

According to the press release, “the plaintiffs suffered injuries including bruising from less-lethal munitions, lingering respiratory issues from tear gas, and psychological trauma that has chilled their desire to protest in the future.”

In addition to a $600,000 payment, the city of Minneapolis agreed to several reforms: a prohibition on “arresting, threatening to arrest, or using physical force … against people engaging in lawful protests, assemblies, or demonstrations,” and a requirement that “officers deployed to protests have their body-worn cameras recording and unobstructed,” per the press release. The settlement also prohibits police from using tear gas to disperse protesters.

Various claims against individual officers in the Minneapolis Police Department, such as former police chief Medaria Arradondo and former union president Bob Kroll, were dismissed as part of the settlement terms.

“People who are demonstrating peacefully should never be met with police violence as they were in Minneapolis during protests over MPD’s murder of George Floyd,” said Teresa Nelson, the legal director at ACLU-MN. “We hope this settlement sends a message to law enforcement across Minnesota that this violation of our constitutional rights will not be tolerated.”

Multiple reports have criticized city and state leaders for failing to develop a clear plan to respond to the riots after Floyd’s death.

“MPD leadership described the planning and response as developing organically, with no formal planning efforts,” a city commissioned report said earlier this year. This left commanders, and “subsequently the officers,” lacking critical information on the “operations plan, rules of engagement and operational objectives for the first several days.”

In other cases, police officers were reprimanded by leadership for using deescalation tactics. The report said the number of 911 calls quadrupled in the days after Floyd’s death and “overwhelmed the system.”

“The civil unrest exacerbated these feelings when officers and field commanders desperately sought information, guidance and approvals for tactical actions and found those calls went unanswered or delayed. This often led to increased risk and angst among the personnel in the field,” the report said.

One of the plaintiffs in the case, Nekima Levy Armstrong, is a prominent Black Lives Matter activist who has helped organize protests in front of people’s homes. She recently served on a “community safety work group” organized by Minneapolis Mayor Jacob Frey.

In a clip from one such protest earlier this year, Armstrong was seen interacting with a woman who claimed to be from the neighborhood and allegedly questioned their tactics.

“Why are you here? Why are you whining? … White lady crying … I don’t know why … I’m just saying that your voice is whiney and, like, high-pitched,” Armstrong said.

About the author: Evan Stambaugh is a freelance writer who had previously been a sports blogger. He has a BA in theology and an MA in philosophy.