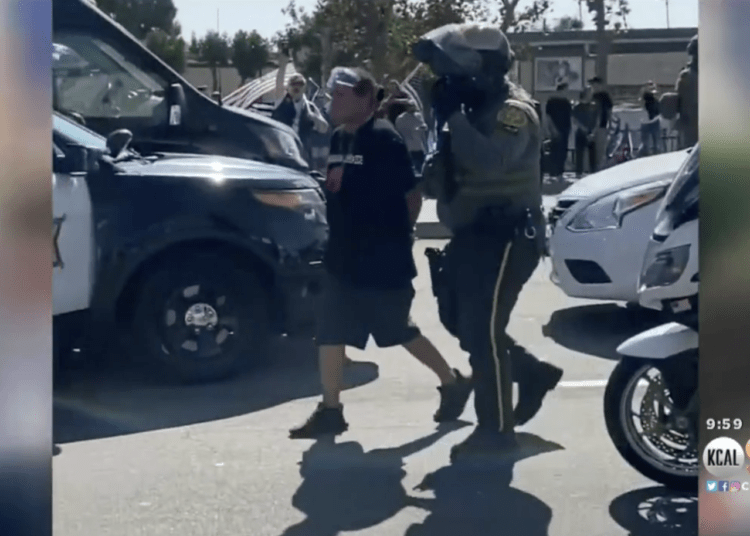 A BLM supporter is arrested after driving through a crowd of Trump enthusiasts. (KCAL)

The incident occurred after violent clashes between BLM supporters and Trump advocates spurred authorities to declare an unlawful assembly and order the crowds to disperse, New York Post reported.

Counter-protesters crossed six-lane Imperial Highway and confronted the BLM protesters, who were participating in an event called “Caravan for Justice,” authorities said.

“Approximately 30 minutes after the protests began, we began to receive reports of physical altercations occurring between the two protest groups, including at least one individual who was pepper-sprayed by another protestor,” the Orange County Sheriff’s Department said in a statement to ABC News.

After the vehicular assault, some attendees chased the car and officials surrounded it before Turner was detained.

According to the sheriff’s department, she is a member of the “Caravan for Justice” event.

Turner, who was arrested on scene and booked at Orange County Jail, also faces a charge of assault with a deadly weapon due to the vehicular assault.

Another person at the event, Jason Mancuso, 46, was arrested on charges of failure to obey the dispersal order, the sheriff’s office said.

On Thursday night, a BLM protester was struck by a pickup truck as angry mobs marched in Hollywood.

A preliminary police investigation found protesters began beating the vehicle with sticks as the driver attempted to sift through the crowd.

The protester, who was self-identified as Angelique Jackson, placed herself in harms way.

She said she suffered a fractured skull after the incident on Sunset Boulevard, KCAL reported. She said it was “horrific” looking at the video of her being thrown to the ground by the vehicle.

“It looks like I shouldn’t be alive. It’s kind of shocking that I’m as fine as I am,” Jackson said. “Of course, I put myself in that position. I knew the risk I was taking, however, he hit me.”

The driver was attempting to drive away from the situation when he struck the protester.